Routes in k. The Slime Wall

Moondance and its neighbor Sundance are two genuinely enjoyable routes on beautiful tight-white rock. They're relatively high on the cliff, at what can be a sunny warm spot on a calm winter day. And because they're fairly far down the cliff, you'll likely have them to yourself.

Both routes start from the same little platform nestled among pine trees. To get there, take the last trail up to the main cliff, as for Wasp. At the cliff, go right, under the big mound right of Wasp, then up the gully to the cliff. Keep on following a trail along the cliff, up and up, until you're forced to step right around some trees. You should be at the start of the route, at a small pedestal/clearing above some talus below.

P1: Climb up the easy fact of Sundance. Williams describes a distinct pitch starting at a large left-facing corner, and tells you to climb its arete and face up to the ledge at 5.1 (you'd then have to walk 15' right to get to the rappel tree above the pedestal).

P2: From the tree, make a few big easy moves to gain the rock behind. Move right, up a few moves, then an easy airy traverse left to gain a face below an overhang. Aim for the left side of the overhang, up into the left-facing corner it forms, then step right and up. Wander on up through easier rock and a final groove above to the trees.

Rappel from the Sundance tree to climber's right.

P2 was fairly dirty and had some loose rock when I last climbed it. The pitch wanders a lot as well - even with doubles, rope drag was considerable. 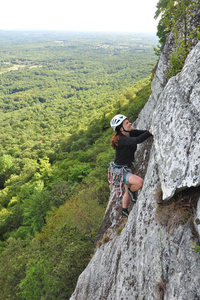 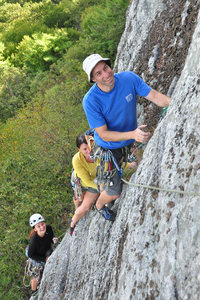