People who enter Shue-Pa (short for Snow Mt and Mt Dabajian) National Park reservation areas need to apply for Shue-Pa National Park entrance permission. The permission is granted only for limited number of persons daily.
Sadly, since 2010, to summit Mt Dabajian is forbidden by national park offcial. However, climbers tended to ignore the regulations and climb in low profile.

The first FA report other than traditional route after WWII. The FA team Kewei Gao and Yeming Mei of "Himalaya climbing club" climbed in 7 pitches. Repeated reports can be found by climbing teams of National Taiwan University (NTU) Mountaineering Club.

The FA report in Chinese (originally published in "Outdoors" magazine issue 154, in Dec 1981) can be found at
sketchtaiwan-uenxic.blogspo…

. Alternative (YDS5.8): at pitch 3 (starting from the very same level of the big ledge at the top of pitch 1 of south face routes), climbing up a few meters and traverse and crawl to the right for about a dozen meters and climbing up. FA: Mingyu Lai, Guowei Ye of NTU mountaineering club, on Aug 25, 2003.

. NOTE: after years of massive earth quakes and typhoons, it is now (observed in 2009) not easy any more to walk on the huge ledge at the top of pitch 2 (ie, the top of pitch 1 of south face route) from the left of south west face to the south east ridge to choose your route. Parties should choose their route on either south or south west face before starting pitch 1 now.

. on the trail facing the south face, to find the left most route on the wall.

. summit and down climbing the traditional route (rappelling the crux on bolt or natural pro). 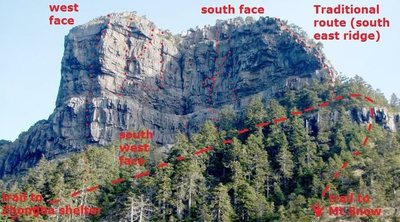 Mt Dabajian viewed from the south (at I Love Yo…