The First Ascent tackled P1 by avoiding the unprotectable, 1/2-inch ice sheet (30 ft) by following it's left edge, mixed climbing marginally-protectable rock to a point where a nest of pins were placed behind a flake system. From here, roughly the top of the ice sheet, a traverse was made to the base of a thin, detached pillar (2 stubbies at base) and up this to the cave (two bolt belay with rope-threadable rappel hangers). The second pitch was tackled the second day by ascending the free-hanging column leading to Grade 2 steps to the base of the headwall. As I (Shawn) was pulling over the top-out moves my tools ripped sending me for a regrettable, unforgettable ride. I lowered to the Grade 2 steps and re-climbed to the last screw, tested it, didnt like it, placed a second one, then topped out. Roger Strong and James Loveridge got the second ascent of P1 by climbing the initial ice sheet and the first free ascent of P2, sans ripper, a couple weeks later.

On the Taj Mah Wall, right of the rock climb Rock, Paper, Scissors.

Ice screws including stubbies, small nuts, pins and samll to mid cams if youu take the original weakness through the rock along the initial ice sheet's left edge. 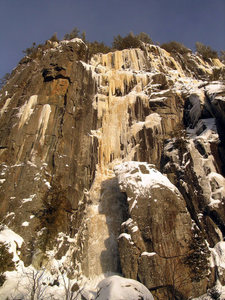 Shawn rapping off Arjumand's Shroud after the f… 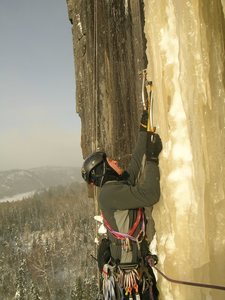 Shawn on the free pillar that exits the belay c… 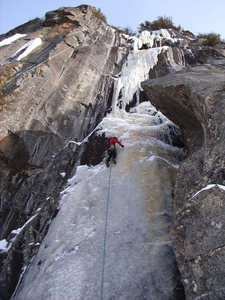 James Loveridge on the 2nd ascent of P1 getting… 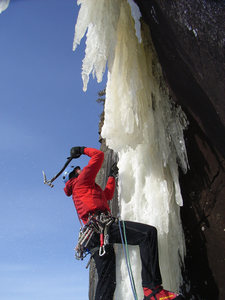 James Loveridge leaving the belay cave on the f… 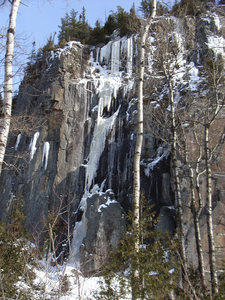