Parks Canada occasionally restricts party size on certain approach/descent trails around Mt. Temple (Paradise Valley/Larch Valley) due to Grizzly Bear activity. It may be necessary to hike in groups of 4 or MORE. Contanct Parks Canada for current restrictions.

Of the somewhat debatable selection of Canadian Rockies routes immortalized in Steck & Roper's "Fifty Classic Climbs of North America", the East Ridge of Temple is likely the best. Achieving the ideal mix between difficulty and safety, the route offers a mellow approach, consistently excellent & sustained climbing, magnificent views, relatively bomber rock and a carefree descent. While the length and intricacy of the ridge and ensuing traverse of the peak ensure a long day, thankfully most of that day is spent climbing. The route begins with many enjoyable pitches of steep rock climbing on good quartzite, then passes a brief shale band before eventually entering the dramatic sculpted limestone landscape of the Black Towers. The final transition to the corniced summit ridge of the North Face Glacier is quite literally and figuratively the icing on the cake; not nearly as treacherous as some, but just enough to keep the long haul interesting.

While by today's standards this is a trade route, the climb should not be under-estimated. After repeating this route in the late '70's, famed North American climbing historian Chris Jones famously remarked about the era, "Never underestimate a route done in the 1930s; mountaineers back then were often fast and competent." There is plenty of loose rock around, pro is tricky to place and the corniced ridge can be unstable on warm days.

Park at a pullout a mile or two below the Moraine Lake Parking Area, along Moraine Lake Road. Follow a trail up the grassy hillside on the North side of the road towards the base of the ridge.

Follow the grassy hillside toward the base of the East Ridge. Eventually vegetation gives way to talus, which is followed to the base of a third class ridge. Follow the path of least resistance for several hundred feet of moderate scramble to a broad shoulder at the base of The Big Step. 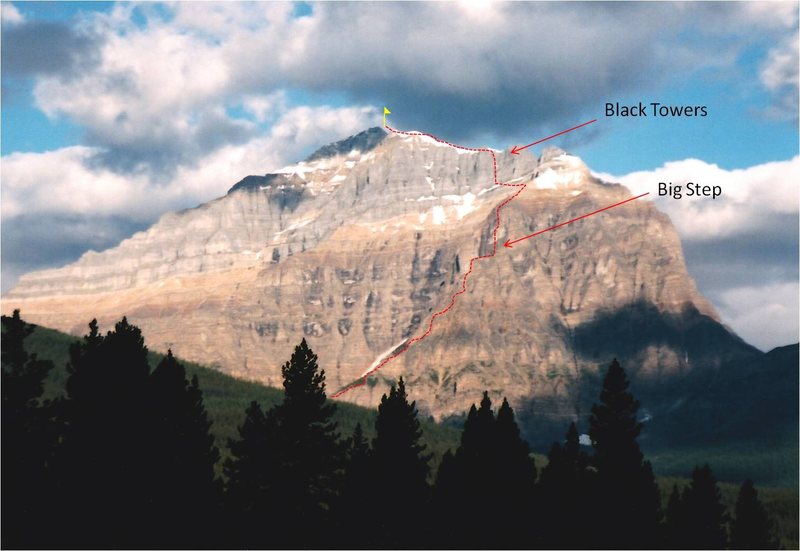 Start a few feet left of the left nose of the buttress, and follow two or three pitches of steep 5.6 climbing on generally excellent rock to the top of the Big Step. More moderate scrambling works up the ridge to another low angle section.

Hike easily along the ridge, mindful of loose rock, until the dark gray bands of the Black Towers are reached. At this point locate a prominent ledge system and traverse left several hundred feet, eventually wroking up & left to the next higher ledge system, and traversing another several hundred feet (snow may be encountered depending on conditions). Continue the west-ward traverse until below a pair of similar-sized, conical towers.

A gully splits these towers, and another gully goes around the right-most tower on the right side. Follow this, right-most gully for a couple pitches on relatively solid limestone at low 5th class to regain the crest of the ridge. Occasionally the upper half of this gully is filled with snow.

Don the appropriate snow gear and follow the corniced ridge to the summit, mindful of crevasses and soft cornices.

Follow the throngs of hikers on the SW Ridge down to Moraine Lake. 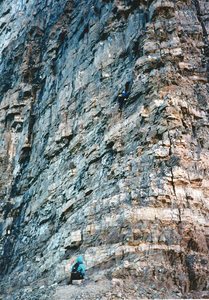 Mike beginning the first lead up the Big Step. 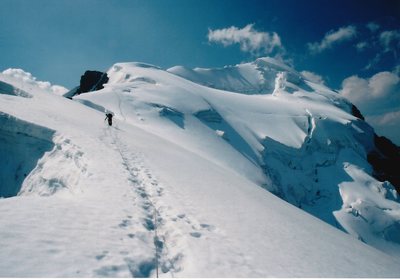 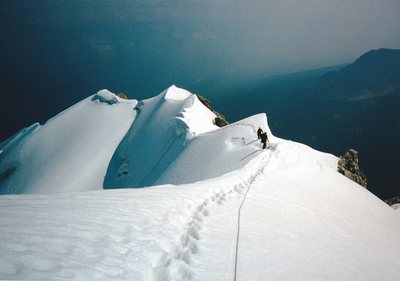 Midway along the ridge. 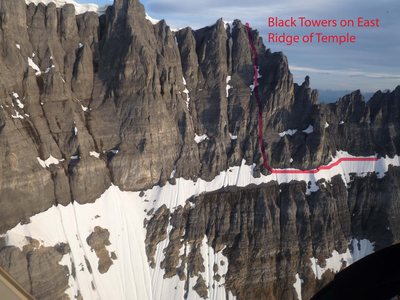 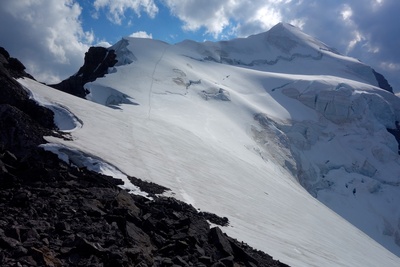 The final snow crest on the East Ridge. This is… 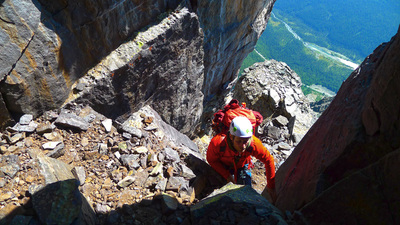 Atop the difficulties of the Big Step. 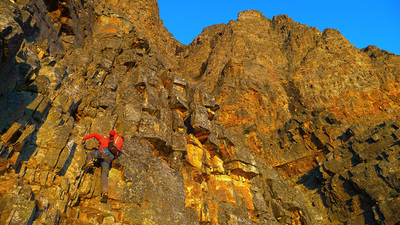 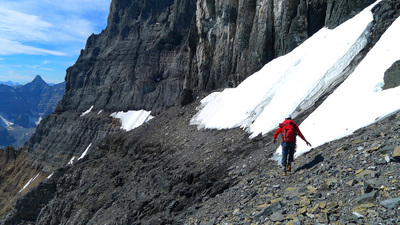 Traversing under the black towers. 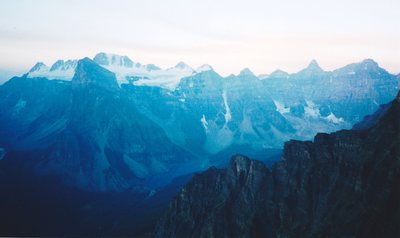 The Valley of the Ten Peaks from the base of Th… 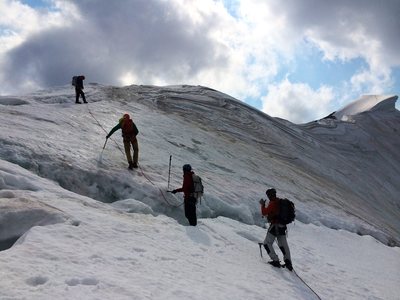 Crevasse crossing on the way to the top, Mt. Te… 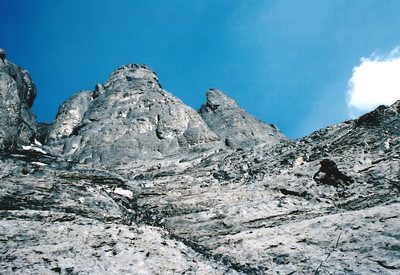 Leading up & around the towers. 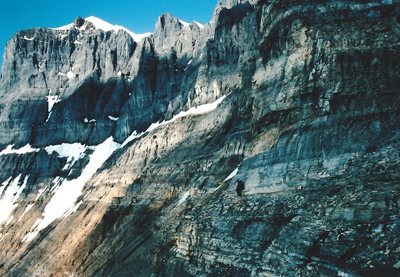 Beginning the traverse under the Black Towers.