Parks Canada occasionally restricts party size on certain approach/descent trails around Mt. Temple (Paradise Valley/Larch Valley) due to Grizzly Bear activity. It may be necessary to hike in groups of 4 or MORE. Contanct Parks Canada for current restrictions.

This legendary alpine route was the first line climbed to the top of Temple's dramatic 4500' North Face. As perhaps the first great Canadian North Wall to be climbed, the first ascent ushered in the beginning of a new age of conquest in the Canadian Rockies. Although a notch shy of the mythic "5.9 A2" grade, this is a test-piece route that should be on every aspiring alpinist's must-do list. While in good, dry conditions this route is fairly routinely freed using mixed techniques, the face is still an intimidating prospect considering its massive size, loose rock, and commitment. Perhaps to emphasize its still-serious nature, the route has recently re-surfaced as the site of a somewhat notorious accident the impressive height of the wall, the relatively pedestrian approach & trivial descent make one-day ascents quite possible for quick parties. Winter ascents are still rare and an impressive challenge. Conditions on the face tend to peak from late July to early August. Like most alpine ventures, there is a trade-off between dry conditions, which allow quick travel on the solid rock sections, and snowier conditions which cover the two chossy ledge traverses in relatively safe snow.The Parks Canada regularly restricts foot-traffic along the approach route to Lake Annette depending on Grizzly Bear activity in the area.

Most parties will benefit from some type of shuttle/drop-off or hitch hike arrangement, as the most expedient approach is through Paradise Valley to Lake Annette, and the quickest descent is down the SW ridge to Moraine Lake. Its physically possible to bivy at Lake Annette, but I can't begin to fathom the bureaucratic hoops one would have to jump through to arrange such a thing.

From the lake, head south to the right tail-fin of the prominent "Dolphin" snowfield. The left fin is also climb-able but more exposed. Follow the ever-steepening snowfield/couloir to the rear-end of the Dolphin's dorsal fin. Make a sketchy traverse up & right to another ice/snowfield below steepening rock. This traverse can be treacherous in lean snow conditions, exposing rotten unprotectable choss. 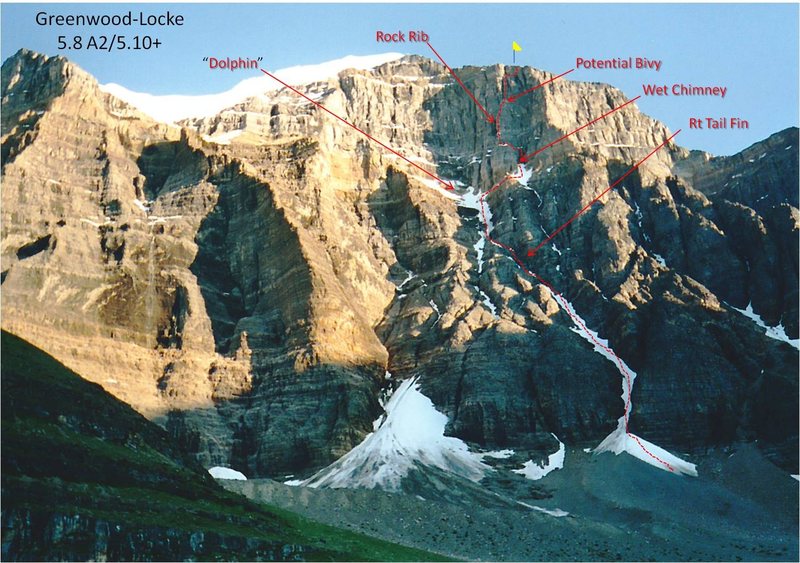 If not roped up yet, now is the time. Locate a massive chimney/gully that is often running with water on warm days. As Dr. Hemlock might say, "Looks like we have some wet work ahead of us". (Depending on where you gained the upper snowfield, you may need to downclimb around a buttress to the right a ways to locate this chimney.) Work up a steep section of relatively solid rock to reach tiered slabs of dark gray stone. Move up and generally right (as needed to find dry rock), then back left along these slabs to reach the prominent (often snow-covered) sloping ledge that runs across the entire face.

Traverse the chossy ledge for ~ 200 feet to reach the base of a prominent pillar. This pillar can be easily spotted from the highway when the light is right. Ascend the right side of the pillar on generally improving rock. Follow your nose along this rib for several pitches, veering from side to side as conditions dictate. The climbing is generally in the 5.6 range, with many ledges & short dihedrals. As the wall steepens, move to the left side of the pillar, and climb a long, difficult slab to regain the prow at an exposed ledge. The crux pitch follows, beginning with a short traverse right, then entering a steep corner, ultimately gaining the top of the rib. Fun climbing along a brief ridge of bulbous towers, passing a good bivy site, leads to the final headwall.

The "Ice Hose" pitch climbs a steep, left-facing corner of solid limestone in dry conditions, but is often wet or icy. The next pitch continues up a shallow corner to reach a good ledge. One or two more pitches of steep chimneys & cracks through shattered rock arrive at a broad loose ledge, nearing the looming headwall. Traverse this ledge, then move up another 30 feet or so to the highest ledge, Temple's own "Thank God Ledge", providing escape from what is clearly an impregnable headwall. There is a catch, and that is the gaping, choss-filled gully that has eroded its way straight through this ledge. Traverse the ledge straight right, down climb to the bottom of the chossy gully, cross to the other side, and climb up teetering dinner plates with no pro to the continuation of the ledge. From here it may be possible to simply continue traversing right along the ledge system. Otherwise, climb straight up from the highest part of the left side of the ledge, on relatively solid, slabby rock.

Follow the throngs of hikers on the SW Ridge down to Moraine Lake. 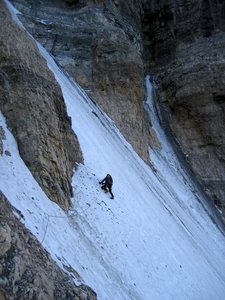 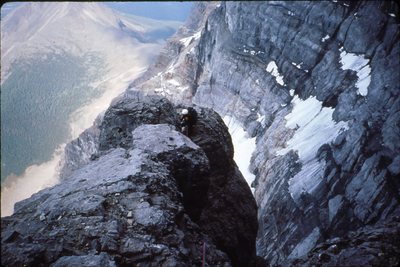 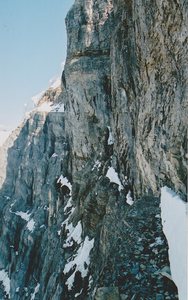 Completing the scramble up to the ledge with th… 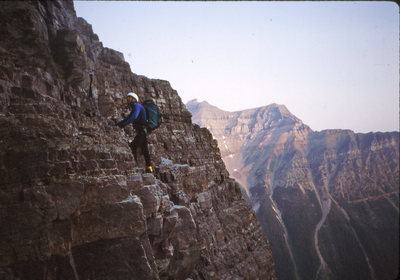 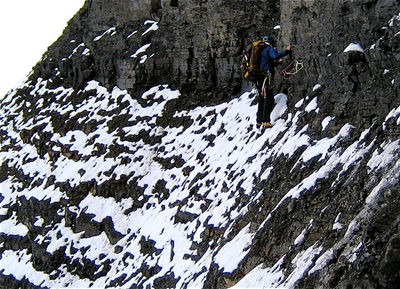 Kitty litter, a little snow and manky gear made… 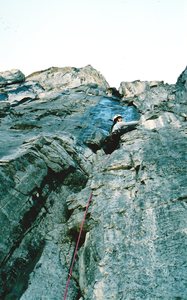 Next pitch above the Ice Hose. 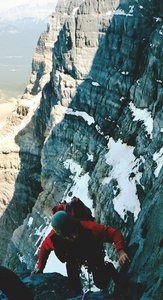 Mike reaching the belay. The North Face in pro… 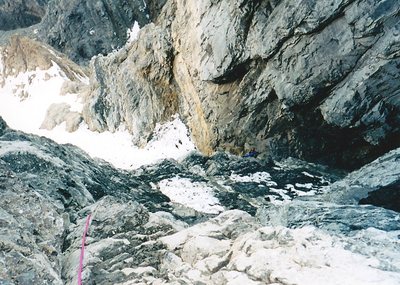 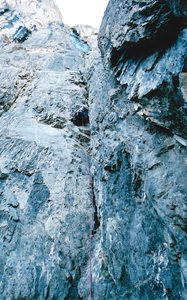 Leading the "Ice Hose" pitch. In the case of t… 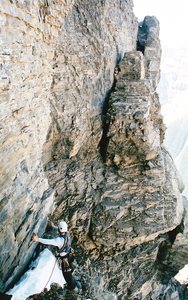 The delicate downclimb into the chossy gully. 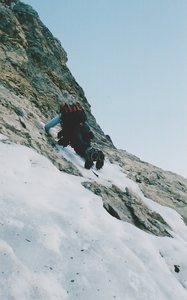 The rightward traverse out of "The Dolphin". Q… 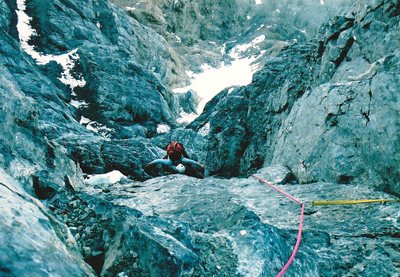 Finishing a mellow pitch on the Rock Rib. Dire…