In 1961, Jim Disney and Gary Moore established a difficult aid route up the middle of the main face at Mary's Bust. Their route was published as "Direct 5.6 A4" in Walter Fricke's 1971 guide, though Disney and Moore never gave it a formal name. In those days, Mary's Bust was known as Sugarloaf; Jim's not certain when and why the name Mary's Bust became the norm for this cliff (both Sugarloaf and Mary's Bust were mentioned in Fricke's guide).

In retrospect, Disney and Moore's route can be viewed as one of the early A4 routes in the Estes Park region. Some highlights from that era:

Disney and Moore used pitons typical of the time (army surplus ring angles, vertical and horizontal blades, a couple RURPs, etc.). They fashioned wood blocks with slings threaded through drilled holes for wide cracks. Jim reports that they were in over their heads, but they survived the ordeal nonetheless. He was the aid specialist, and Moore was a strong free climber. A few bolts were placed on the ascent, which was accomplished over a few days. They used fixed ropes until established above the "black hole," and then pushed to the summit from there in one day.

I recently became interested in trying to free their route, and Jim and I had a pleasant email exchange. He graciously gave me permission to add bolts to the route where I deemed it necessary, and New Direction is the end product of this endeavor.

On the day of the FFA, Jim drove up the canyon and met us in the parking pullout. His intention was to hike to the cliff to take a few photos, but he had recently biked 50 miles (!) and his knee was sore, so he stayed at roadside. It's always such a pleasure to meet and chat with the pioneers of our sport: Jim, thanks so much for taking time out of your day to meet us at the base! Your presence lifted our spirits and we had an awesome ascent.

Additional tidbits: Jim served as a Larimer County Commissioner from 1993-2001. He is an exceptionally talented artist, and has been an artist-in-residence for RMNP. If you are on Facebook, you can view some of Jim's wonderful paintings on his page. You've also seen his work every time you've been in Steve Komito's boot shop as Komito has displayed several of Disney's paintings for years.

Obviously Disney and Moore made the FA of the wall in general in 1961. They also climbed at least the first two pitches (as described below) of New Direction, using direct aid where you would expect. Above that point, it's unclear where the line of Direct lies, though my guess is that New Direction is largely independent from Direct from this point forward, possibly with a few short stretches of overlap.

New Direction roughly follows the first half of Disney's old route Direct. From that point, Jim is unsure where they climbed (it's been almost 50 years since the ascent). I'll post a photo at a later date that takes some guesses as to the original line of Direct and its relationship to New Direction.

Look for a dark slot (the black hole, described in Fricke's guide as a "black, evil chimney") about 130 feet above the ground in the center of the cliff to get your bearings. New Direction climbs through this short chimney on the second lead (as does Direct).

Pitch 1 (5.10a, 65 feet): Clip the first 3 bolts on Disneyland, and then head right into the right-facing dihedral that defines the first lead on Direct to reach a 4th bolt. You'll see one of Disney's old bolt sleeves about 3 feet right of the 4th clip. A few pieces of gear takes you up the corner. When you reach a bolt at the top of the corner, this is your signal to head out left to the anchor on Disneyland.

Note: I suspect Disney and Moore approached the right-facing dihedral from the right, incorporating a short crack a few feet right of the initial bolts on Disneyland, though as mentioned above, their exact line of ascent is uncertain after all these years. At the top of the corner, I'm guessing Direct moved up and right to access the base of the black hole. There are a few loose plates in this area that I avoided by moving into Disneyland.

Pitch 2 (5.9+, or maybe 5.10a?, 140 feet): Clip the first bolt on pitch two of Disneyland, continue up to its overlap (cam), and then lead right to reach the base of the black hole. [I placed another cam at this point, and back cleaned the first, which meant no rope drag the rest of the way.] The black hole is a rather enjoyable 5.7 chimney, despite Fricke's ominous description. After the hole, follow the obvious crack line for 50 feet (5.9+/10a, with adequate though sometimes tricky protection), above which lies 70 feet of very easy terrain (5.3 or so) that leads to a good ledge. Go left on the ledge and find belay bolts and chains on the face to the left. Tie in long to enjoy the comfortable ledge (the bolts are in their present location to facilitate an easy retreat from here).

Pitch 3 (5.11c, 120 feet): Position the belayer beneath and a bit right of the bolts at a foot stance (this allows for a good view of the leader). Clip 5 bolts through a steep bulge (5.10), and then place a couple wires, the second of which is a totally obvious bomber placement. Head straight right from here and then up to reach 5 more bolts in a very shallow, white-washed corner. Long runners on the wires are essential to mitigate rope drag. The shallow corner is continuous 5.11, and it ends with a fabulous stretch of overhanging jugs (we're talking monster holds) with nice exposure. An unexpected ledge in black rock lies above the jugs -- it would be an awesome bivy spot -- find the belay bolts 15 feet higher, and tie in long if you want to watch you partner struggle up the crux.

Hike through the notch left of the pine tree, scramble down the north side of Mary's Bust (3rd class) to arrive in the Golden Hall, and then go left to the rappels down Devil's Backbone (3 rappels, 60m rope required).

The final two pitches are shared with the Stanley Hotel Finish on The Broadmoor. The first pitch may become a popular "base pitch" -- if you want to do only that one, I suggest bringing small wires, a #6 or #7 hex, and a #0.75 Camalot.

New Direction begins as with Disneyland, in the middle of the SE face of Mary's Bust, beneath a very obvious black hole some 130 feet off the deck.

You can easily rappel from the top of pitch 2 with a 60 m rope. Go down and somewhat left to find the anchor on the top of Dynamite (70 feet, new chains on older 3/8-inch bolts). Note that this site's current description of Dynamite does not accurately describe the entire route (it describes only the first 80 feet to the retrobolted midpoint anchor; see topo for bolted rappel station locations). Now rappel Dynamite to the ground (2 more rappels).

The route is not set up for easy retreat above the 2nd pitch. If you make it up the 3rd pitch, you'll have no trouble with the 4th, and from here, you can down climb the 5.3 pitch on the Stanley Hotel Finish to reach the top of Broadmoor proper, which has rappel stations every 80-95 feet all the way down (4 raps).

For protection, I used a set of wires, a single set of cams from #0.4 - #2 Camalot, and #6 and 7 hexes. Two #1 Camalots are useful on pitch 2 (one of them gets back-cleaned at the overlap on Disneyland). Bring a few runners and a double runner (useful on pitch 2 to sling a big horn, and for rope drag on pitch 3). The only pitch that requires no gear is the 5th.

I listed this as a "trad" route because of the gear requirements. I can hardly claim to having climbed it as a traditionally established route -- it was bolted and cleaned from the top down. 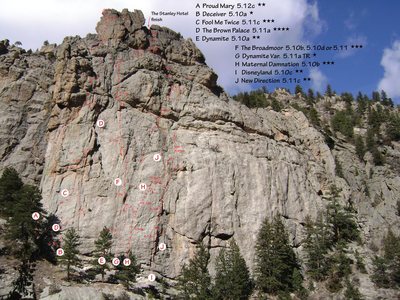