Lights in the Forest

Routes in The Mordor Wall

Memorable. 6 great pitches! Pro on the last pitch is R, but should not be an issue if you're climbing 11.

P1-Start at a bolt ladder to the right of Highway 61 (where the old tree climb began) and climb corner to ledge system above. 5.8 - 80'

P3- Move up and left via crack into a corner (bolt). Straight up into the chimney feature and then to another great belay ledge! 5.9 - 140'

P4- Up and at 'em! Up the 5.8 handcrack then traverse right under overlap to right edge and bust a move up (assume harder if you have a smaller ape-index) to a bolt above and a friction move to the belay. 11b - 90'

P5-6 May be combined. Move out right from belay to a bolt and to a devious 5.9 move, trend up and left to another bolt (crux) and climb a finicky friction move to easier climbing and the belay bolts. 5.11b - 50'

P6- Climb out right a bit and up, then trend right a bit through some lichen, to the trees! 1 bolt protects the pitch. 5.9 - 60' An alternative at the start of p6 may be to traverse right to escape into an obvious feature. From Tyler Rohr: Some beta on pitch 6: After the lone bolt it was pretty unclear to me where to go. I found a piton up and right in small feature (maybe 10-15 ft)...I ended up moving right maybe 20 feet from the piton through dirty ground and then the rest of the way up (30 or so feet?). A lot of the climbing involved scrapping off lichen before committing to a foot, but eventually, far right, things cleaned up.

Look for bolt ladder right of Highway 61. You can see the former tree-climb laying on the ground adjacent to the start. 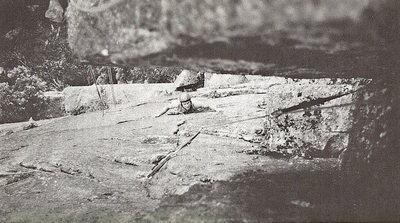 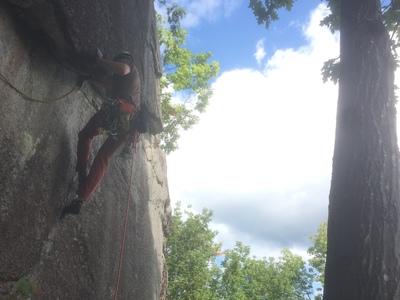 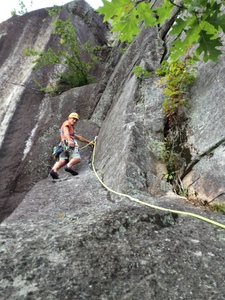 Looking up from belay atop p2 at the start of p3 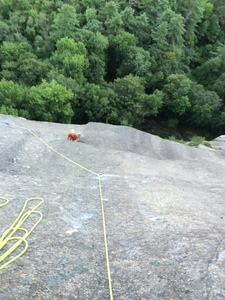 Looking down on p5 (you can see the runouts)

More About Lights in the Forest