Sort Route Route Details
Suggest Change:
The lowdown How do I locate this rig? If I fall, what's there to help stop the fall? Flag Discriminatory Name Other Suggestion
Add To Page

Routes in I) The Amphitheater

On April 26th, 2022, the Santa Fe National Forest issued a closure order, fs.usda.gov/Internet/FSE_DO… , of much of the Jemez Mountains public land due to the ongoing Cerro Pelado wildfire. The closure order is effective immediately and in force until December 31st, 2022 or until rescinded earlier. This closure includes nearly all the climbing areas listed in here on MP in the Jemez Mountains and Jemez Valley.

Supramanya strikes hard right from the start with a sharp but positive mono boulder problem past the first bolt. After that, it's more moderate climbing as the venom sinks in to a rest on a gigantic ledge after the [oddly placed] fifth bolt.

From the ledge, clip the bolt off to the left but move well to the right to find good holds to get established on the upper headwall. Snake your way back left towards the arete on steepening but juggy terrain to grab the killer black tufa-like handrail. Slither your way up sneaky climbing to the anchor.

The jury is still out on the difficulty. Not as sustained as Nguvu.

How do I locate this rig?

Just right of the shared start for Nguvu and Fear of the Dark. The first bolt might appear high but a good undercling makes for good clipping and since the crux is arguably at the first bolt, it's nice to have it up there a bit.

If I fall, what's there to help stop the fall?

Ten bolts to a two bolt anchor with biners. I'd like to move bolts 5 and 6 a bit but it's definitely safe and climbable as is now. I placed the bolts while cleaning the route without TR rehearsal. 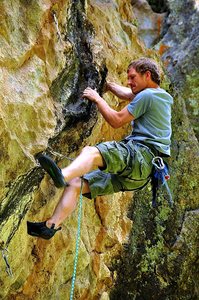 Clinging to the cool, black tufa-like rail on t… 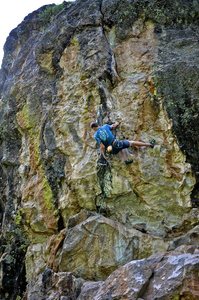 On the upper wall above the big ledge. It's tig…