Routes in The Waltz Formation

This one is posted up primarily as a caveat to any future suitors...it was done on-sight, ground-up and almost no cleaning was done beside a few necessary block hucks, so the route remains very dirty and has some potential death-blocks. The climbing is decent, and with a major cleaning it would be an ok line, but in it's present state it's probably best avoided...
Dirty Dancing follows an obvious dihedral system, with a prominent roof 1/2 way up, on the nothwest prow of the 2nd Tier of the Waltz. From the base of the wall, scramble out the mossy ledge to the far right side and belay (marginal gear anchor. The lower 25' of the dihedral are shared with Paso Doble's 1st pitch, before it cuts a hard left at a bolt. Continue straight up the corner above, with a few suspect blocks and a good finger/thin-hand crack. Awkwardly turn the big roof on the left and make insecure, hard moves to get established beneath a good fingercrack. Crank this into an ever widening and progressively easier crack system to the top. It gets off-width near the end, but is easy. There are one or two big sketchy blocks on this final system to avoid! Belay off the three bolt anchor atop Paso. Rap down Dirtburper in one 35m rap to the ground.

On the northwest prow of the second Tier of the Waltz. Shares the start with Paso Doble, but continues straight up the obvious dihedral above to a prominent roof.

Double set of cams and stoppers, with extra purple tcu to #.5 camolot size, a new BD #4 and #5 are nice for the upper bit. 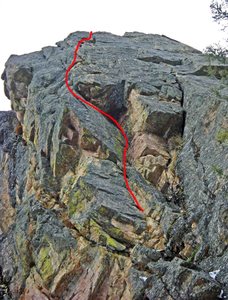 The route (foreshortened in the upper 1/2) seen…