This is the couloir depicted climber's left of Sunrise Couloir. It is submitted here as a climb, though it is also a ski mountaineer's test-piece.

When the couloir melts out during the couloir climbing season, it offers more as to an easy alpine climb. And, as a climb, it can be fickle with snow becoming more unconsolidated as you ascend; but fun just the same. Be aware, this route gets sun, so use the early start, otherwise you might take a beating.

I believe we had 45-55 degree snow with a short easy mixed section. Most of the route is around 40 degree snow, but gets steeper as you climb. So to explain the distances, it's a about 600ft total, but the semi-technical part was 2 pitches with a 60m, with a 70m you could just go for the top as just one pitch and grab a boulder anchor, no problem. The exit didn't have a threatening cornice when we got on it; although my partner had issues with Kenny Loggins playing over & over again in his head -- I feel the need, the need .. for speed.

The couloir is located in the Summit Lake cirque, climber's left of the massive Sunrise Couloir. It's basically the couloir that looks bad-ass when looking at the Sunrise.

The approach is really nothing and much less time and effort than getting to an Apron. Though I will say the Aprons look very impressive from the side; you wonder why you did a couloir when you could have had an Apron. But, Top Gun had been on my tick list for a while, and we wanted to see what it was actually like. So, somewhat an adventure climb.

Descent -- you can glissade the Sunrise (watch out for the cornice that builds and threatens the route like a huge serac), or take either Spalding Ridge or Evans Ridge. Spalding would probably be a bit quicker than Evans; depends on your sight-seeing desires. Top Gun doesn't take very long to climb.

A few blades/arrows; a few Aliens, off-fingers Camalots, or tri-cams; and a couple pickets; used one 60m rope; a 70 meter would actually let you run the semi-technical section all the way to the top. We felt the need to rope up as the snow was unconsolidated in spots. The rock pro was excellent and to the side of the snow. Even if the snow route gave way, the rock offered good protection to make the inherent risk a little bit more acceptable. Although, we did have a bit of a Zen moment which could have also contributed to our decision to rope up. But we brought the gear, what the hell, use it.

Something that looks worse than it is as far as difficulty. 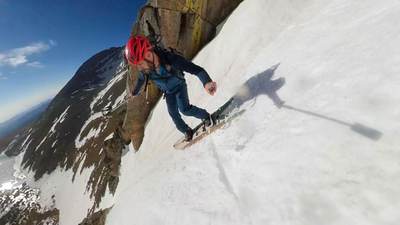 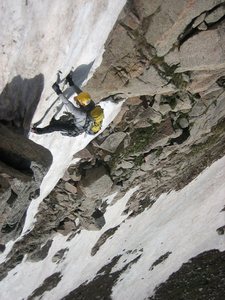 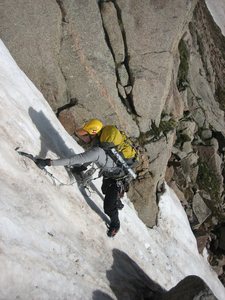 Hey, I know that guy. Photo by Goss. 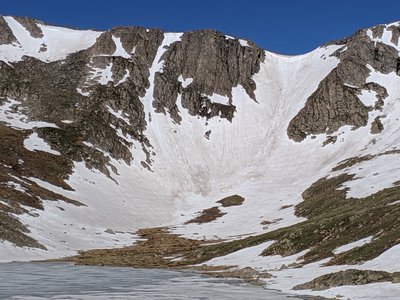 Top Gun on the 4th of July. 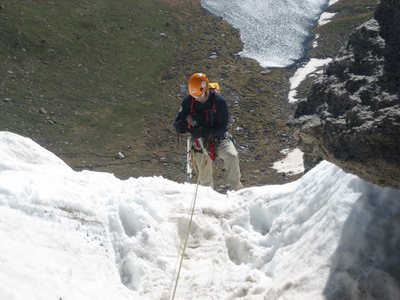 And there it is; keeping up foreign relations..… 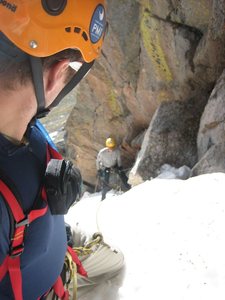 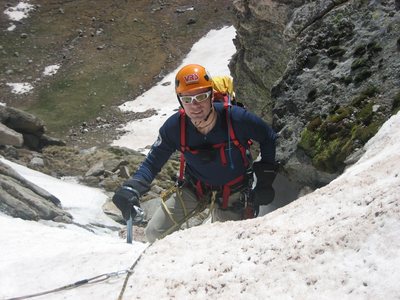 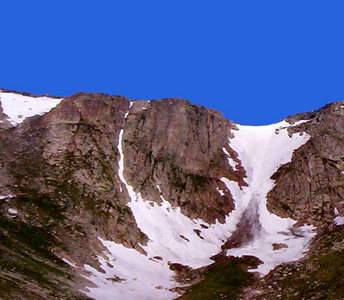