The NE Ridge of Lone Pine Peak is middle of the 3 prominent ridges recognizable from the town of Lone Pine. The full ridge traverse is 3 miles long and rises 6900 feet. Many people spend multiple days on this route so be forewarned. There is no water once on the ridge, although there may be water on the descent depending on the time of year.

Secor bumped this up to 5.7 in newer editions of The High Sierra: Peaks, Passes and Trails. I did not encounter anything harder than 5.6 on the original route. The rock is frequently crumbly (unlike the N Ridge), but the difficult sections are short and route finding was not overly challenging. For me the crux was navigating and bushwhacking the E ledges descent for which only a vague description is available.

GETTING THERE
From the town of Lone Pine take Whitney Portal Road toward the portal. Make a left on Olivas Ranch Road Turn right at the T and an immediate right at a Y (left branch leads to a house). Note: on the descent you'll come in from the left-hand branch of the T). Stay on the left-hand branch of the road and continue to a small turnaround. There is another nicer parking area at the base of the route accessed from the road leading to the Lone Pine campground. I did not drive this, but according to the topo: From Whitney Portal road turn left at the Lone Pine campground road. Continue past the campground turn-off and stay left at the road branches.

ROUTE
From the turnaround there is a faint trail leading down to a stream. Cross the stream and head up the ridge (the righthand skyline). Hike up the sandy initial part of the ridge (class 2) until you get to the good stuff.

Basically, follow the ridge alternating sides as needed to fine the easiest line. If it looks harder than 5.6 check the other side. I had to backtrack twice near the end of the ridge, but overall I did not find the routefinding challenging. At the end of the ridge skirt the base of the steep walls to your left aiming for a large gully (see photos) that heads up and right to the summit plateau. It took me 9.5 hours to solo this and I was not acclimatized. Others have reported 11-12. If you are going to rope up plan accordingly to allow sufficient time for the descent.

5.7 Direct Finish Variation (FA: 2008, the pullharder crew - Scotty, Nate)
From the notch at the top of the Northeast ridge, climb straight up the headwall, loosely following a 12 inch wide dike from the bottom to halfway up the headwall. Where the dike veers left, go straight up, aiming for the left side of some big overhangs. Pull the final overhang at a splitter finger-size crack.

DESCENT
It is highly recommended that you spend a few minutes checking out the topography from the valley before you attempt the descent. To access the E ledges descent head down the class 2 sandy slopes keeping the E ridgeline in view. The key is to avoid getting sucked down to the steep cliffs to the S & SE. If it seems like you are too close to the cliffs contour left. Don't expect a trail or cairns. The ridgeline splits repeatedly and the gully is loose and shrubby. You'll eventually be able to see the Tuttle Creek access road. The hike back from the Tuttle Creek road to the Olivas Ranch Rd turnaround is ~3.2 miles.

Option 2:  Go down the class 2 west side of Lone Pine Peak into the Meysan lake cirque.  Pick up the Meysan lake trail and descend to the summer cabins, there catch the Whitney Natl. Rec. trail and take it down to the Lone Pine Campground, or near by dirt road depend on where you parked.

Comment: I traversed over several ridges partway down to get a more direct line to the Olivas Ranch Rd. The gully I chose involved downclimbing a short class 5 chimney. In retrospect the extra mileage on the road probably would have been easier. The descent took me a whopping 5.5 hours. I have read if you have the route dialed expect 3.5-4 hours.

NER as seen from Bastille Buttress! 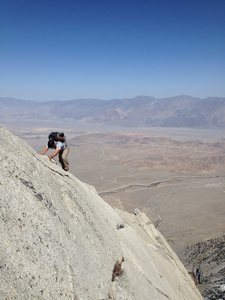 Mark Collar on the NERLPP 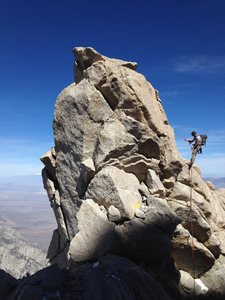 Mark Collar rappelling the final tower on the N… 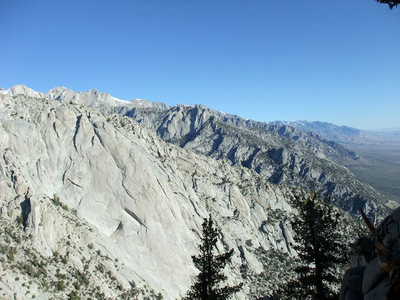 looking over to the N Ridge, home of Bastille B… 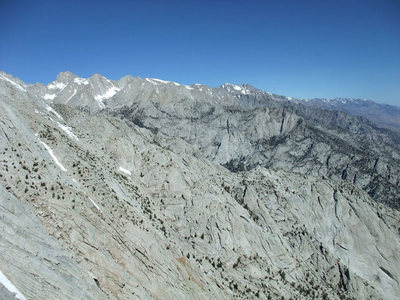 view to the north 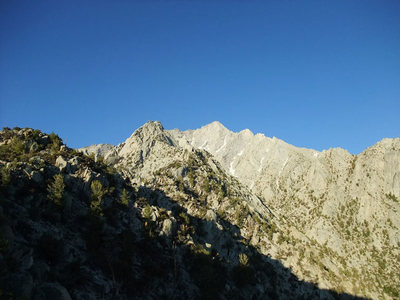 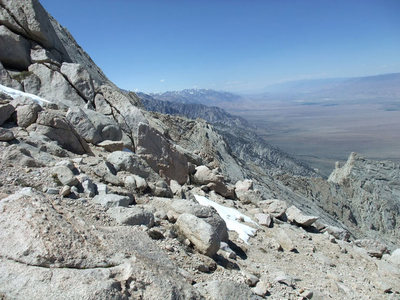 keeping close to the E ridge on the descent 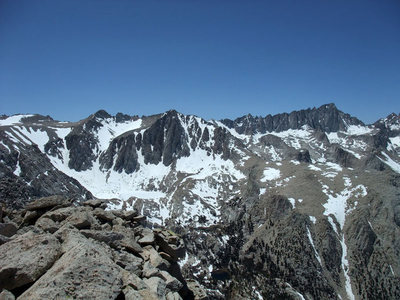 view from the summit plateau 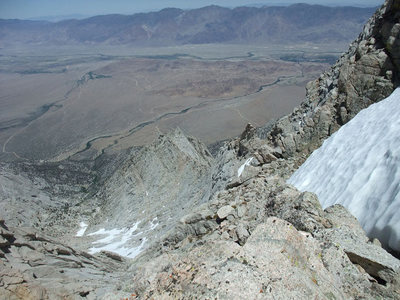 valley from the gully 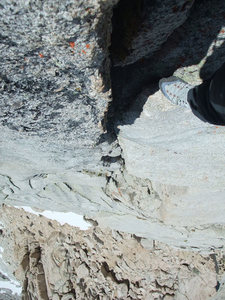 looking down the most difficult section I found 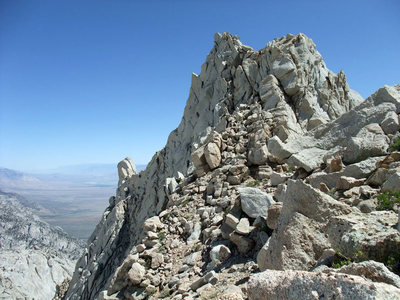 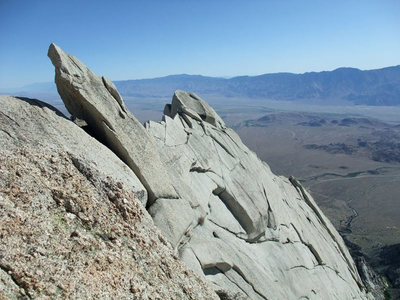 steeper terrain with easier climbing on the N side