This is a superb route on high quality rock in an outstanding location. The rock is similar to that of the 3rd Flatiron, though much less travelled.

There seem to be many approach routes, none of which are particularly quick. One way is to first climb 'The Keel' (1000 feet 4th class), then contour approximately 300 feet South from the summit of The Keel to reach a distinctly separate rock from 'The North Wing'.

Alternatively, scramble up the talus field which runs parallel to The Keel on the southern side. Follow this to it's end and bushwhack 50 feet west to reach the base of the route. Approach time: 1 hour 30 minutes.

Tiptoe up the slab on perfect rock for 700 feet to the summit, passing some interesting rock architecture on the way. Smoother, better quality rock is found to the right, and tree belays are found to the left.

The ideal descent would be to go up and over into Shadow Canyon and follow the main trail down. However, during raptor closures (Feb 1st- July 31st) it could be frowned upon to do this. An alternative is to head North from the summit for approximately 1000 feet then East down tricky ground to emerge in amongst the Shanahan Crags and then on to the Mesa Trail, being careful not to disturb too many bears on the way down. A true adventure climb.

Eds. this appears to be the 4th wing counting from the left.

Protection is good, but sparse at times.

Starting up the first pitch. 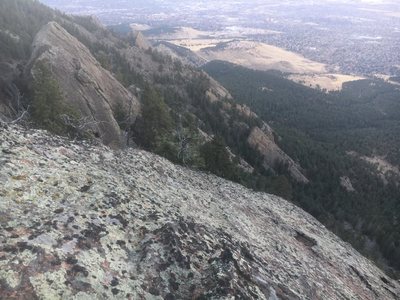 From the top of the wing. 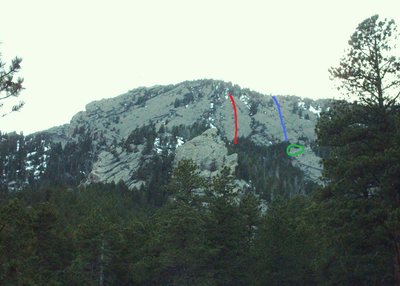