The Triptych Pillars consist of a set of 3 juxtaposed pillars located high up within the Triptych drainage. The word triptych is used to describe a work of art which is divided into 3 sections. So it is a fitting name for the 3 pillars which one encounters as they make their way up this drainage. Each of the 3 pillars is about 40 meters in length.
To locate the parking area for the approach, drive about 1 mile past the bridge which flows over Legg Creek. Look for the Valley Ranch mailbox on the right and the road to the ranch branching off to the left; park just past the intersection. It should be pretty easy to spot the pillars high up on the hillside to the north. Judging their condition or that of the approach is not as easy. So, you have to go take a hike to figure that one out.
Make your way across the sage until you can drop down into the drainage as it makes its way out of the hillside. Most likely you will encounter a frozen, icy creek bed interspersed with various sections of loose rock, etc. that seems so typical for this side of the valley. Fortunately this drainage never gets too extreme likes some of its cousins such as Legg Creek or Schoolhouse Creek. As you work up the drainage, it will look like you are about to get boxed into a canyon, but there is a sneaky exit on the right that is hidden from view until you are just beneath it. Making the decision of where to dump the pack is a tricky one due to the seemingly endless rambling and rolling nature of the approach. However, there are a few larger bulges and curtains (from 3 to 15 meters) that have to be climbed along the way, so pick a spot to rack up and leave what you dont need to take further up the climb.
As you are getting closer to the amphitheater that contains the pillars, you will likely encounter a spot where the ice gets really thin (there may be some bare rock with flowing water at this point too) as it pours over a small cliff band. Either scout out a way past to the left or the right or just sack up and deal with the thin ice/water boulder problem that confronts you. It is not as bad as it looks, and there are actually some descent hand holds on the right side of the mess. It is over within 20 feet or so anyway. The rest of the way up to the pillars should be pretty straight forward; maybe one more curtain has to be overcome.
Upon arriving at the pillars, you will encounter 3 separate climbs. Unlike the artwork type of triptych, which describes the largest work being located in the center; these pillars seem to range from the fattest and easiest on the right to the thinnest and most desperate on the left. Joe Josephsons Winter Dance describes the right hand pillar as WI 4, and the center and left pillars as WI 4+. Most likely the difficulty or even possibility of climbing all 3 pillars will vary from season to season.
The left pillar is the thinnest and hardest looking of the 3. In the past there apparently was a log that leaned against the cliff that allowed for a mixed start to the climb (up the log to a bolt and then an M4 traverse to the ice). This variation has been called the Wyoming Rodeo. As of February of 2010 the log has fallen down, so climbing this variation may now be doubtful.
Up above the pillars there is an option of climbing a few more pitches either to the right or the left, as the drainage splits. It is only a short walk up above the top of the pillars to figure out if these are climbable. In order to get back down, use a combination of rappelling and down climbing. There is a tree located above the middle pillar that should have some rap slings on it. Getting down can be a long and tedious affair as most of the ice seems too low angled to justify rappelling, but too steep to just walk down either, so a lot of down climbing is involved. Overall, this is a nice outing which gets you on a lot of ice.

Double ropes and a rack of ice screws is all you need for this climb. 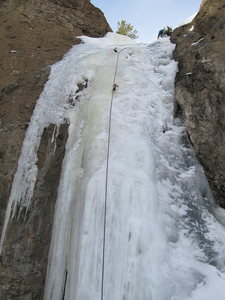 What was the "wet slot" last year was frozen en… 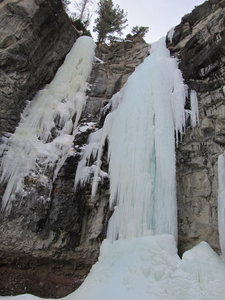 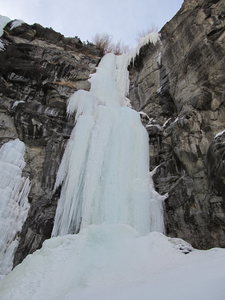 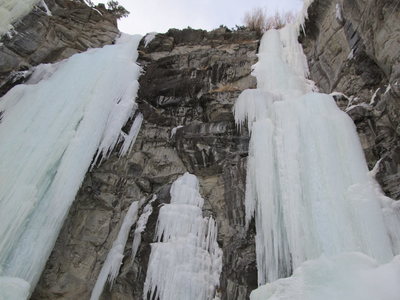 The Center and Right upper pillars 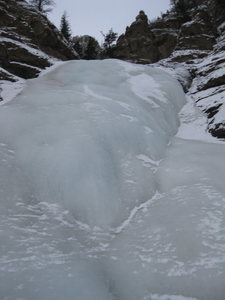 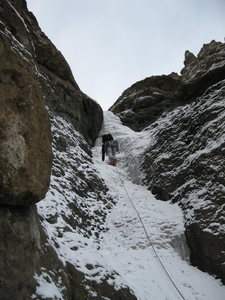 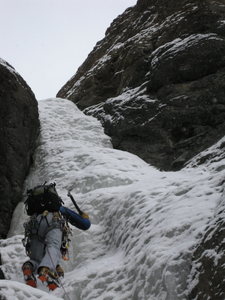 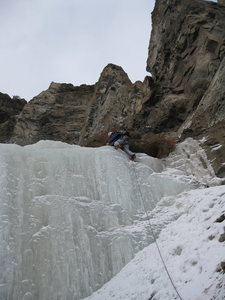 Ice lower down in the gully