Access Issue: The Cabin Wall and the Island are both closed to climbing Details

The Cabin Wall and the Island are closed. In regard to the rest of the areas in Escalante "Continued use of this area relies on good stewardship and a relationship of trust with the landowner."

Respect local residents, cattle and wildlife by following the posted speed limit of 20 mph.
Minimize user impact by staying on established trails and roads.
Park off the road in established pull-offs or parking areas.
Pack out human waste and garbage.
Keep noise to a minimum.
Portions of Escalante Canyon are active ranching areas. Keep pets under leash control at all times.
No fires and no discharge of firearms.
Camp in established areas only. No camping on private property.

The Cabin Wall and the Island are now Closed.

This is a classic, left-facing corner that would be a sought-after classic even at the Battle of the Bulge Wall where classic corners abound. Begin with some mostly-solid Chinle and stem, crimp, and reach until you can grasp a nice horizontal and establish yourself in the corner on the Windgate. Place a couple cams and start liebacking, which is followed by more liebacking, and then more liebacking up the slightly overhanging corner until a great foothold and hand jam appear. From here, it is straight in jamming or more liebacking up what is now a #1 Camalot crack. The anchors, which are now two bolts and chains, are just above on a ledge. The massive amounts of brightly colored fixed tat has been removed.

Although this is Escalante where this route was, without a doubt, led on hexes originally (before they made the even numbered sizes, of course) and topped on the crumbling, blank, overhanging wall (without chalk and before those dang new-fangled sport climbing shoes), most climbers now will take a few of every size from #0.4 Camalots to #2s and lower safely to the ground with a 60m rope.

This is the obvious corner at the top of the trail.

A handful of each, #0.4 to #2 (maybe one #2) Camalots, plus a small TCU size piece if you want to protect the moves over the Chinle roof. 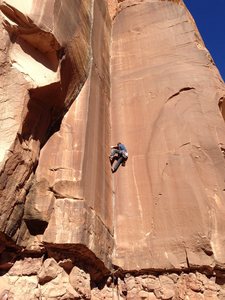 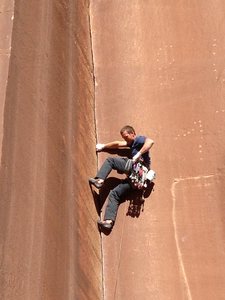 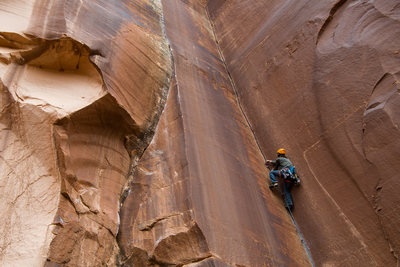 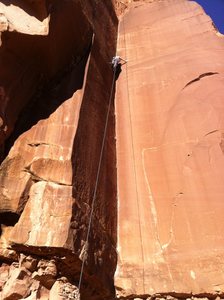 Leah Frazer on Passion for Pumping.

More About Passion for Pumping aka Corner Pump Station