The crux is either working up the 40' thin slab w/o pro or the steep face above this. In good years, the ice on the slab takes screws (it would have before the Jan. thaw this season), but in lean years, no gear will go until the headwall is reached. One may be able to reach right and place a cam in the rock, but the ice gets really skinny in that direction.
I had only enough rope to reach a ledge on the left 100'+ up. In order to gain a rappel tree, I had to leap left from a small ledge blocked by a rock rib, hence the route's name. It is an easy leap with a stiff penalty for failure. I suspect in good years there's plenty of ice to use for that traverse.
There is potential to lead another 20' or so higher if the ice is in well.
UPDATE:  The topmost section has been climbed, as it was "in" during early February 2018. The overall grade does not change. There was also a fantastic possible run up the right edge of the ice formation, that would include a WI 4 pillar and an easy mixed finish up a narrow ice streak. It may be possible to run up the left edge on harder mixed terrain as well.
This is one of the better ice pitches on Crane, though its isolation will keep it from drawing crowds. Also note that it is currently on private property.
ADDENDUM: The right edge of this formation has been climbed (Feb 2019). It is a bit harder than the middle of the flow, but unless one completely limits pointing in anything but the pillar (which would make it grade 4), it is only marginally so. The ice above the pillar is narrow and protection is limited. There is a final bulging step with rather anemic ice to get past, but it isn't much different than the final moves of the original line.

Note that a 70m rope barely reaches the base from the very lowest tree, with stretch. You may need to use double ropes, or rap to a birch tree on the left and rap again, in order to reach safety.
The route is visible near the far end of the Giant Boulder Pile north of the Waterfall Wall about 25 minutes' walk. This is north of the Northern Cascade another 15 minutes.
Walk past the entire boulder pile to access a left-slanting ramp with a steep wall on its right (several short, steep ice flows) and work up left along it until the righthand wall dies out, then traverse right to the base of the climb.
Look for a 40' low-angle ice slab border by a large, overhanging, left-facing corner on the right.

Screws, from 10 to 20cm, and runners for occasional 'cicle slingin'.
No anchors at top; though there are small trees that will do. Descend by two-rope rappel, or walk climber's left to any of several spots were multiple single rope rappels will get you back to the base.

Please Note: this flow lies on private property. All indications are that the land will be transferred to NYS in the near future, but this is not yet the case. 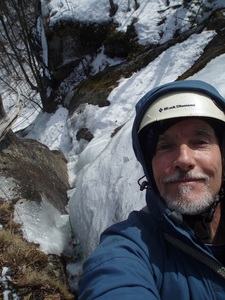 Egotistical Selfie, looking straight down from… 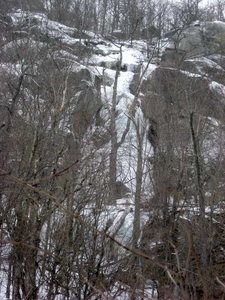 From farther down the ravine. The short vertica… 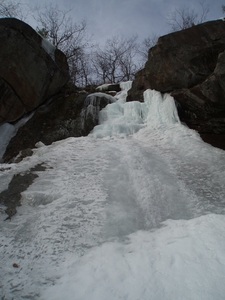 Sunnier shot of the route, in better conditions. 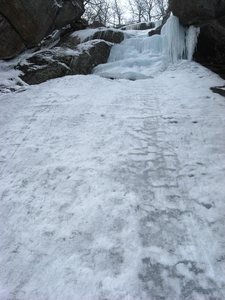 Looking up from the base of the route. Note tha…

More About Leap of Faith