Routes in US Highway 550

OTR is located in a small gully system to the right of Gravitys Rainbow. It is a 2-pitch climb that could make a nice alternative if the crowds on Gravitys Rainbow are too much. By itself, I think it is a worthy objective, too.

The two pitches are completely differently in character; the first pitch has the same exposure as Gravitys Rainbow, so it is somewhat sun-baked. The second pitch faces to the west, so it does not get as much sun, and the ice quality is much better.

At the top of the second pitch, wander over a short section of lower angled ice to a tree with some slings.

To reach the route, hike up the same road as for Gravitys Rainbow. Just past where you would head uphill to Gravitys Rainbow, look for the entrance to the gully that would eventually lead up to the base of the first pitch. The approach, the slope separating the first and second pitch, and the descent could be prone to a slide; so be sure to check the avalanche conditions and plan accordingly. Floatation definitely helps if there is any significant amount of snow cover.

A few ice screws and 2 ropes should be all you need to enjoy this route. 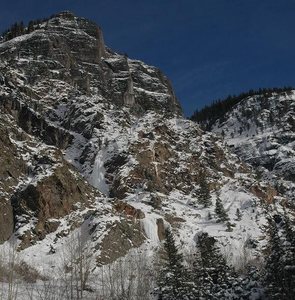 From the 1st curve in the road. 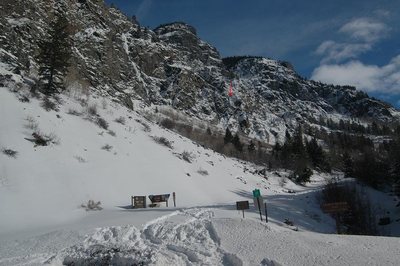 From the parking area. 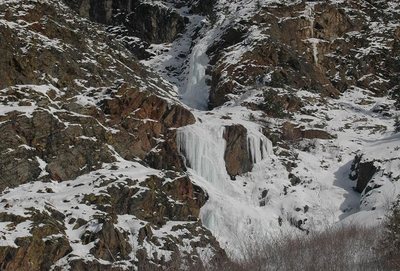 From the road, just below the climb.

More About Over The Rainbow