The first pitch starts at the left side of the shallow cave. Fairly short pitch, gaining the low angle area above the cave and below the steeper 2nd pitch trough.

Scramble for around 60m up low angle terrian to the base of the chimney/trough.

Second pitch goes up this trough and is around 40m in length.

A short scramble gains the summit.

A fun route with great views and a nice introduction to climbing at Meteora. Also nice to suss out the standard rappel route from the Doupianifels.

South side of Doupiani. Follow a low angle rib aiming for a small longish oval cave feature on the left (but on the right side of a brushy gully which slants down the south face). Route starts on the left side of this shallow cave. Rappel route.

Rope and a couple draws and slings. Fixed anchors at the end of the pitches (large glued-in ring) also double as the rappel anchors. I seem to recall a few bolts protecting the fairly run out face climbing. 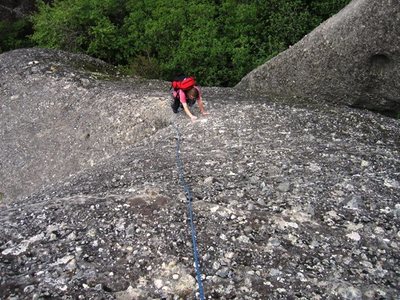 Hiking up after the steeper trough section of t… 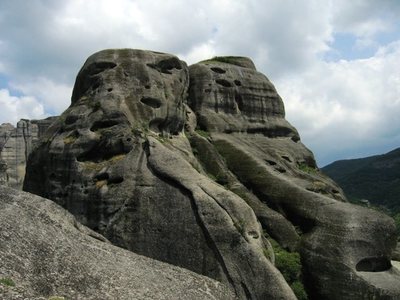 The south side of Doupianifels.