This route has difficult moves surmounting each of the three bulges that it passes through in the lower half. The upper face is run-out but quite a bit easier than down low. Each of the bulges has reachy moves and if you are shorter than about 5' 6" you may not like this route much.

Scamper up into the first scoop and clip the first bolt. Move up and to the right to the second bolt, after clipping this you may want to un-clip the first to limit rope drag. Mantle over the first bulge and stand up below the second. Pull over the second after clipping another bolt on mostly good holds. Spend some time figuring out what to do at the third and crux bulge with difficult moves along the lip. Wander up the face above clipping 2 more bolts along the way. Finish up along a crumbling flake and at anchors right at the rim.

As you walk along the Moses Springs trail towards the Monolith, just after passing below the low white overhang the trail will jog to the left away from the wall to avoid a large boulder. Heat Seeking Moisture Missile starts by stemming up between this boulder and the wall. It climbs the wide black streak up the wall through 3 bulges.

6 bolts to a bolted anchor. The guide book says nuts and TCU's up high, but I could not find anything that would be worth placing. If you can you may want to reach back and un-clip the first bolt after clipping the second as it is pretty far to the left of the rest of the bolts. 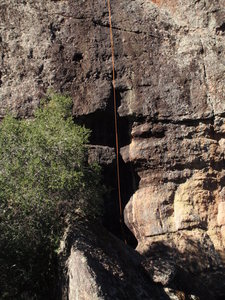 Rope hanging off the route. Most of the line is… 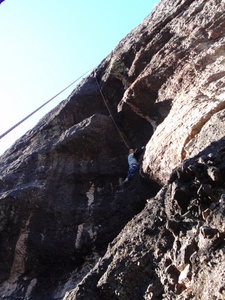 Linda having cleared the first of the three bul…