THE classic, hard ice route in central New York, and one of the most reliable routes in the Salmon River Amphitheater. Named for a song by the punk music band Lard; this route began the salmon-theme route names here. The route was a long-standing problem, and the scene of some remarkable falls on stubbie screws.

The ice on this route is the highest continuous ice in the Amphitheater; the ice reaches up into the shale band higher than its neighbors. It usually forms early, and due to the geometry of the shale, is more resilient to thaws. Even so, the final columns below the shale band are often poorly bonded and really steep.

Climb steep pillars to a ledge. Continue up a short, steeper section of pillars (crux) to the bottom of the left-facing corner. Clip a bolt and move up overhanging rock, then step right to a ledge above the corner. Scratch up the final overhanging wall (no protection) to turf sticks, then up to the trees.

In the center of the Amphitheater. Locate a left-facing corner in the shale band above the ice. Pick a line in the columns directly below this corner.

Good selection of screws plus one bolt. Some stubbie screws are often required for the final columns below the shale band. There's a single bolt at the top of the ice (and it really helps to extend this clip with a permanent 4'-long runner), but after that, there's no adequate protection to the top; a fall from this section is not advised. 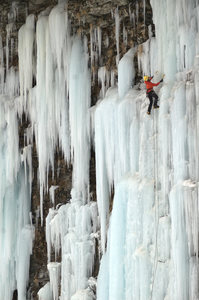 Climber on Mate, Spawn, and Die. 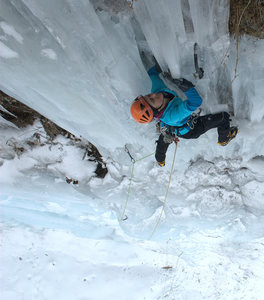 The top columns are often the crux of the route… 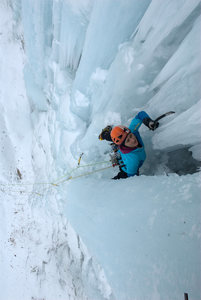 The lower columns of Mate, Spawn, and Die. 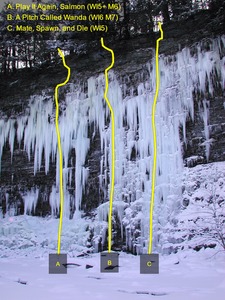 The Amphitheater at Salmon River Falls. 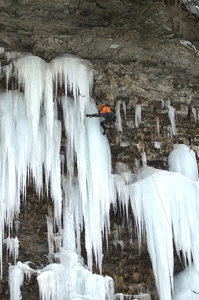 Breaking stuff off. This ascent climbed the lef… 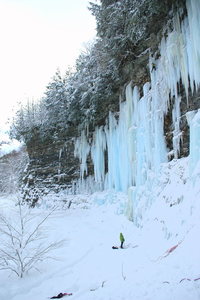 Climber near the top of the ice on Mate, Spawn,…

More About Mate, Spawn, and Die