Routes in The Sanctuary

This is a good line that is marred by an oddly contrived start and mundane appearance. To make matters worse, the route is hidden in the trees, hard to get to, and looks like no fun from the ground. However, once you get to the second bolt or so, this route climbs a beautiful orange streak of incut edges & the occasional sinker pocket.

Stick clip the first bolt. The route begins with a boulder problem that is supposed to be in the V6 range, but the only way to achieve that sort of difficulty is to ignore obvious large holds that are no more than one arm-length from the plumb line. If the guidebook grade of 12d is important to you, ignore the obvious holds and climb mossy divots straight up.

The obvious sequence is to start a bit right, climb up to the horizontal crimp band, traverse left along the band to the flake, then up & back right. From this point head straight up along the cool, featured streak to a no hands rest on the ledge. For some reason the route doesn't end at this ledge. Instead climb the pumpy overhanging wall above to the crappy, rope-twisting anchor.

Continue east along the cliff-base trail past the main Sanctuary, passing the "Immaculate Deception" arete. The trail jogs left, then goes steeply uphill towards the cliff. This is the first bolted route right of the big dihedral. 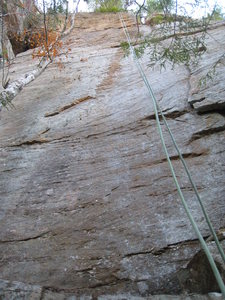 The route climbs a bit left of where the rope i…