All Quiet on the Western Front

Yep, the Schoolroom is a kind of no man's land. But here you can find solitude against an ethereal backdrop of orange hues and crisp edges above the pollution of Ogden if your timing is right.

Second bolted route from the right. This route is a more direct line to "Rehab's" anchors and thus can easily be Top Roped if the prospective leader doesn't feel like risking the big runnout between the second and third bolt - ledge fall potential. However, if somebody is willing, they are free to add a bolt between bolts two and three. A small/medium sized nut can be found there, though.

Again, like "Rehab's", this route begins with a difficult mantle to stand up on the same ledge. Some people feel that this is the crux. From the ledge, traverse a little left at the second bolt and then go up and slightly right. I personally feel this is the crux. 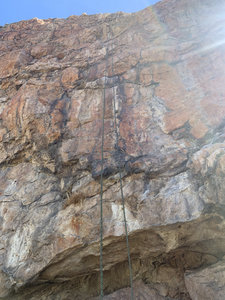 Ropes hangs over approximate path of the route. 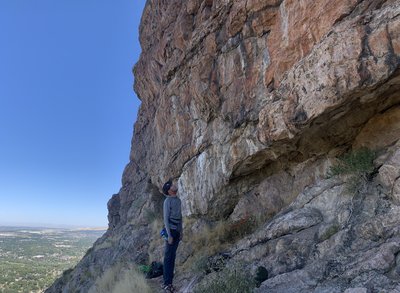 Caleb, at the start of "All Quiet on the Wester…

More About All Quiet on the Western Front