A rarity in the 'Fords, Smearing for Jesus is a sustained face climb that requires slab skills, stamina, and patience to succeed. The crux comes early on, but keep vigilant, there are several tricky face moves in the first half of the pitch.
Start at a double-bolt anchor/rap station about 115' above the ground and 40' east (and slightly downhill) of a small tree. Utilizing knobs, tiny edges and pure friction climb past nine bolts, aiming for a short left facing corner about 70' up. Glide up the thin corner to a bulge, pull past it, and cruise the beautiful splitter to the top. Be careful, to the right of the splitter are some fishy looking blocks that are off-route and easily avoided.

The first half of the route is bolt-protected. The second half requires micro-wires, small stoppers, and cams from 3/8" to 2" (doubles are handy in the smallest sizes). There's a double-bolt anchor at the top. Either rap the route and TR with 2 ropes or carefully rap off to the west with a 60m rope. From here you can walk down to the start of the climb and rap to the ground with 2 60m ropes or one 70m rope.

Smearing for Jesus ascends a light colored buttress with an obvious horizontal quartz dike at two-thirds height. Perched on a tier one pitch above the ground, it's accessed by climbing either of the first two pitches of The Hand of God. The left (west) option is marked by a protection bolt at the start. Look for it about twelve feet up. This pitch is 5.11+. About fifteen feet to the right (east) of this pitch is the original (and far easier) start to The Hand of God. It follows a shallow trough-like feature with double cracks . It's somewhat marred by vegetation but is more fun than it looks. This pitch is 5.8. Both of these pitches end at a double-bolt anchor. The bolts are more difficult to see from the easier pitch; just keep looking left (west) when the climbing eases off.
Be careful when you top out as there's an abundance of loose rock on the tier itself. When you do top out simply walk east for 40' or so and find the double-bolt anchor that marks the start of Smearing for Jesus. This anchor can also be used to reach the ground with a 70m rope. (CAREFUL! it's almost exactly an 115' rappel). 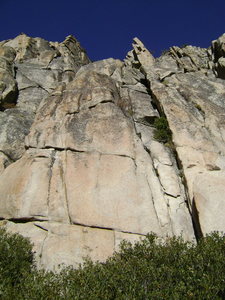 The two first-pitch options for Hand of God whi… 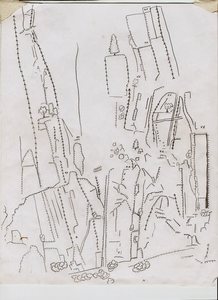 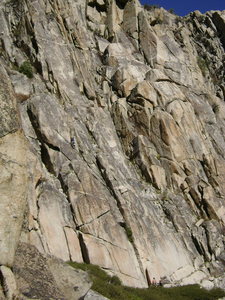 More About Smearing for Jesus