Beginning March 1, the public will be asked to avoid climbing or hiking in areas where birds are known to nest. The climbing areas that are historically known to have nesting activity are referred to in many climbing guidebooks as:

The Wall, Far Side, The Meat Walls, Disappointment Cliffs, Fin Wall, Broken Tooth, Cat Wall, Slug Wall, and Reservoir Wall.
This list serves only as a guide and does not indicate every avoidance area or encompass all known names of the affected climbing areas. Two of these walls are on partially or wholly on lands managed by SITLA, who is working cooperatively with BLM to protect raptors. The BLM and SITLA will survey walls and generally in May can release any routes that don't have active nests. The walls with active nests should be avoided until the young have fledged. Eagles and falcons mate for life and return to the same nest sites year after year to raise their young, your cooperation is vital to their survival.

Signs will also be posted at the main trailheads.
Contact Jason Byrd at the BLM with questions: jbyrd@blm.gov

Climb hands past some ledges in a L-facing corner/stem box to a roof. Traverse left to R-facing corner of stembox and pull roof with a hand jam and miraculous jugs. Climb varied L-facing corner to chains with fingers, hands, and OW. A superb "Second-tier" classic at this wall!

at least triples from tips to fists and a #5 for the top. 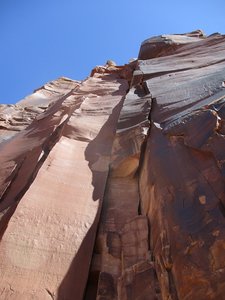 The Host goes left of roof, The Hostess goes ri…

More About The Host