Boyer's Chute was named after Del Boyer who was the first to free solo the route.

Pitch 1: Start about 30 feet to the right of the corner on a more featured part of the sloping terrain. The climbing is easy (5.2), but many climbers may want to rope up to avoid exposed slab moves.

Continue into the chute proper and up it. This is generally best done unroped. Easy, even walkable, terrain is interrupted by harder but short steps. Low height above ground and the closed, chimney-like confines of the chute make climbing feel fairly secure. The stretch of more consistent scrambling is also only 4th class if that. The chute will fork eventually the right fork looking far more inviting as the left one is topped by a large chock stone about 20 feet up. The route goes left!

Pitch 2: There are two options: (1) scramble past the chock stone on the right without protection (5.3, but exposed and with a somewhat crumbly feel to the large-enough and otherwise solid holds near the top) or (2) climb on the left and protect in a crack (about 5.6 and close to vertical). Above the chock another stretch of scrambling follows until a 20-foot chimney is reached.

Pitch 3: Climb the chimney facing right. Exit is to the left into the broken rocks or climb on the right of them. The second block from the bottom is loose. Belay from two new bolts. This pitch is the crux of the route and may feel harder than the 5.4 rating.

Pitch 4: Start all the way left, deep in the corner. Move right on nearly vertical but well featured rock. The path of least resistance will slide a bit to the right, traverse left under the large agave, and continue the rightward slant to a level area with some trees. This pitch is often done unroped by experienced climbers and other variations of it exist as the terrain is generally forgiving.

Pitch 5: The easiest way up from the level area is to head all the way to the right as soon as you step up on the rock, then go left to break in the small headwall and scramble left over piled boulders to reach an easy ridge which takes you to the summit. If you rope up for this pitch, you may belay from the area of the boulders. (Low 5th or high 4th).

Use the Topp Hut access and go up Rabbit Ears Canyon. Turn left after the most prominent, and last, of the small peaks in the bottom of the canyon and follow either the stream bed or the ridge to its left directly to the bottom of the route on the west face of North Rabbit Ear.

As you climb, you will notice rap stations. Rapping the route is possible but not recommended unless you are comfortable scrambling down most of the terrain. It is far faster to take the south side rap route with only two rappels and bushwhack back to the start of the route from there. To do so, go southeast from the summit following cairns to a ramp. Careful, one of the rocks about half way down to the ramp is loose. It's about a foot across and round. Once on the ramp, scramble down it to a bolt+piton rap station. The second rap, from a nice ledge and over some scary looking but actually not that easy to dislodge loose rocks, will take you to the saddle between North and Middle Rabbit Ears. To get back to the bottom of the route, go down the gully and turn right well below the rock (near the bottom of the cliff the brush is fierce). Even better, leave the packs at the bottom of the main Rabbit Ears Canyon to start with and just go down the gully following a trail.

Rapping down the route: If you limit your down climbing to third a class rock, you are looking at about 8 raps. The rap stations are set up and are in good condition, but the vegetated, slabby and featured terrain will force you to use single-rope rappels. Even then hanging up a rope is frustratingly frequent and loose rocks can come down at you at any time.

The top rap station is on a tree just north of the route and below ridge line. Short and fairly clean rap takes you to the flat area. There is some tat there at another tree, but the real station is on the tree all the way to the south. Another good rap goes to a ledge. Scramble along it to the north and a big down to the next station. Slant your next rap a bit north and look to your left (north) for the next station. It's not on much of a ledge, but it's a tree, and it does give you a fairly clear shot to the top of the chimney. The two bolts there are your fourth rap. Do it inside the chock in the chimney. Here you start scrambling down for a bit, then rap again from the horn on top of the chock crux. More scrambling follows, with two raps over the steeper sections, with more scrambling again, and finally one rap at the bottom if you want to avoid getting down the exposed slab. All in all it's a time consuming way down.

A minimal rack will be sufficient. I go with one green Camelot (the 0.75 cam works both left of the chock and on top of the chimney), a set of tricams, and a few nuts. A more conservative leader may take a set of single cams instead of just the one. There are plenty of trees for anchors as well as bolts above the chimeny and a rap station (with even a cable incorporated in it) for an anchor above the first crux. 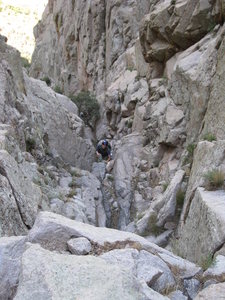 Looking down from the top of the first chock-st… 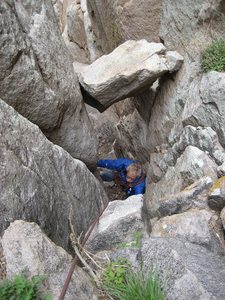 my father coming up the crux chimney 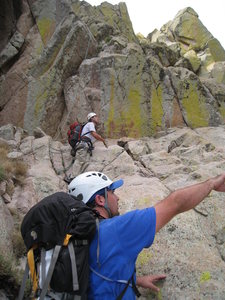 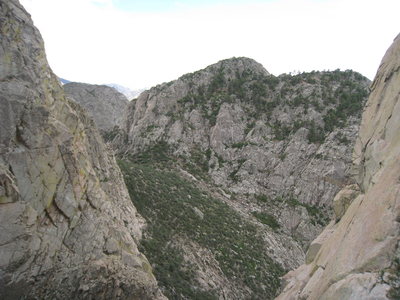 The view of Rabbit Ears Massif from the first r… 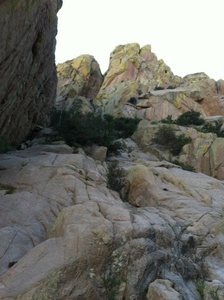 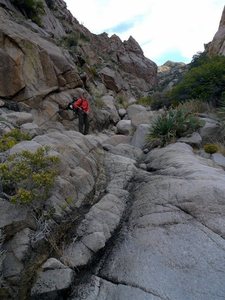 Much of the approach in through this rocky dry… 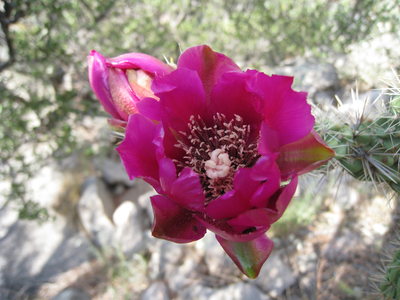 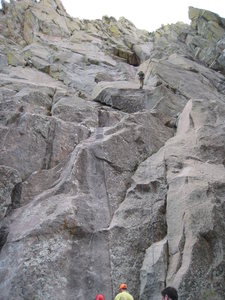 Looking up at our rappel route (South Face Dire… 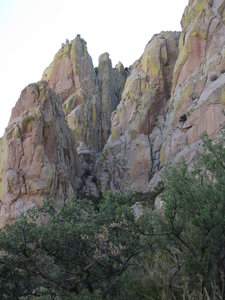 A little higher now, you can finally see the ch… 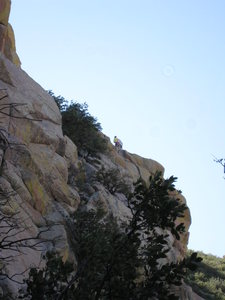 Our party of 7 split up here as Aaron and Zack… 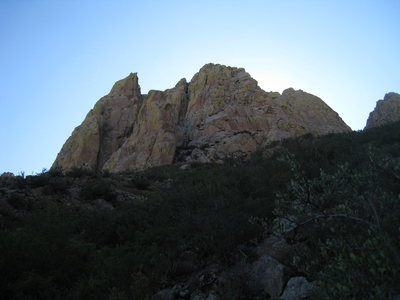 This shot shows the entrance to Boyer's Chute (… 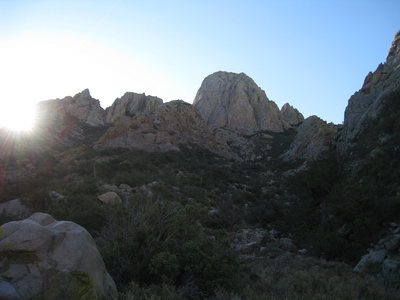 North Rabbit Ear at sunrise on the approach hik…