Routes in B. Rodeo Wave

Cow Reggae is a short, technical route on some of the best stone The Wild Iris has to offer. Though barely 25 feet long, this route is very sustained, with multiple difficult moves, and an intricate crux just below the anchor.

Begin high up on the ramp, with a sinker 2 finger pocket for the right hand and an odd shaped four-finger thing for the left. Lunge up to the obvious huge jug, and move left along the break. Good holds lead to a sinker sidepull mono (right hand). The tweakiest move on this route is a long cross off of this mono, but once you figure out the feet its not too bad. The crux boulder problem begins just above with burly, tricky, insecure moves between two finger pockets & shallow dishes. Work up & left to a nice mailslot and a good shake. One more tricky sting in the tail leads to a great jug below the anchor.

4 bolts to 2 Bolt Anchor. Most folks stick clip the first two bolts to protect against a ledge fall, and run the rope through the first bolt of Stetson or Rodeo to keep the rope out of the way. The third bolt can be difficult to clip, so a long draw may be helpful.

This route is sometimes referred to as "Bone Machine". The source of the confusion is that back in the day, when routes were first going in at The Iris, there were so many projects that folks sometimes assigned 'working titles' to help keep things straight. This line was given the working title of "Cow Reggae", but when Frank Dusl nabbed the FFA, he re-named it to "Bone Machine". For whatever reason, the 'original' name has proven to be more popular, and appears in most guidebooks. 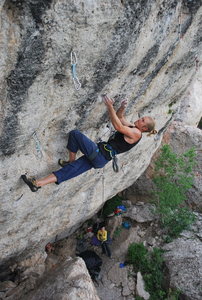 Getting ready to slot the mono. This climb is… 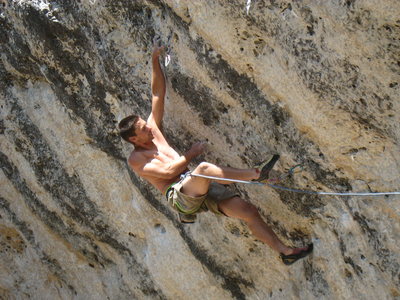 The sidepull mono move on Cow Reggae. BJ i… 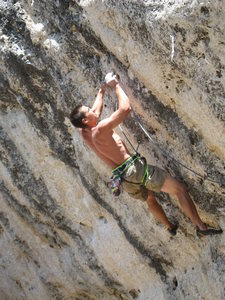 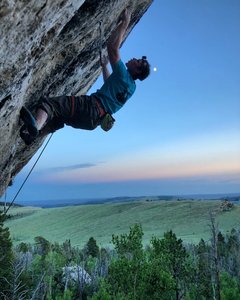