Climb the 200+ft steep crusted snow ramp to the base of the ramp beneath the steepening wall. Veer right away from the multiple free standing pillars (crux) and finish route.

NOTE: In late Jan 2016 there were two full pitches of ice, including the "famous" parasol...an ice cave COMPLETELY FORMED BY ICE (as opposed to an ice cave formed by water freezing over a rock overhang).  This amazing feature is formed when very cold, strong, updraft winds blow water 90-degrees out from the gully and the water freezes horizontally! The "parasol" was about 6 feet deep, 8 ft high, 10-12 ft across and had twisted icicles growing down from the ceiling! AMAZING (see photos). A later climb, in Feb 2020, had only a small (about 2ft x 2ft) parasol that looked more like an large serving tray made of ice stuck horizontally into the flow, but the climb itself was still a great climb for its grade!

Rick Wilcox's guide calls it "A beautiful route in a beautiful setting" and, when the "parasol" is "in" it certainly is! "Gunkswest" ranks it one of the top 10 ice climbs in New England [see comments], and he should know! When you consider the approach is way shorter than, for example, Shoestring or Pinnacle, the 1 1/2 hr drive from No. Conway doesn't seem so bad.

Central south side of the notch. Parking is directly below the climb at a pull off parking lot. Walk down westerly or rappel from trees.

Approach: Park on the pull out on the south side (the 2nd pull out on the left, coming from Errol, and JUST BEFORE the height-of-land on the road. If you are coming from Errol you may not be able to see the climb from the car window.) and hike straight up the steep slope to the base. 10-20 min., depending on snow depth and previous pack-out of the approach.

Mountain-Project-User "Ben" suggests that if the climb is too short, it is an easy drive (probably about 1 hr) South/East on Rt 26 to Grafton Notch State Park (in Maine) which has some nice ice at about the same grade or slightly more difficult, some of which is very close to the road.

Ice screws. Belay at the trees above the climb.

In these conditions I thought the climb a bit more technical than "2+", and don't really know the difference between "2+ and 3-", so gave it a "3".

We ended P1 on the left wall where someone had bashed in a "beak/snarg[??]" and put a bright red sling on it (to rap from !!!???, perhaps mistaking it for a piton?!) Backing up the "beak" with 2 screws, the next pitch past the "parasol" was 200+ feet and a 60m might not reach all the way to the rap-anchor tree.

We Rapped the route, after trying to find the trail, which is quite far back at this point. If you rap you'll probably need a thread anchor as even 2 x 70m won't reach the base.

Mountain-Project-User "Ben" suggests there's a walk off that returns you to the base of the climb. See COMMENTS 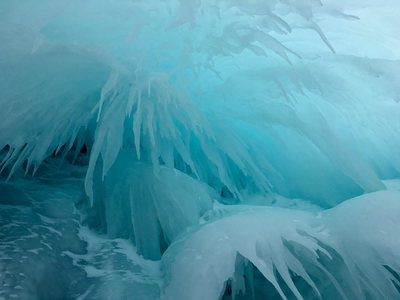 Up Close and Personal....inside the "Parasol" (… 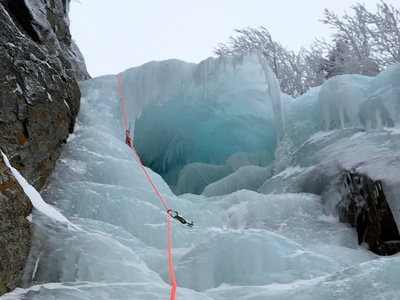 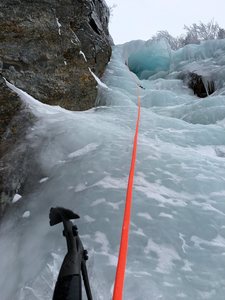 Looking up at the top pitch and the "Parasol"… 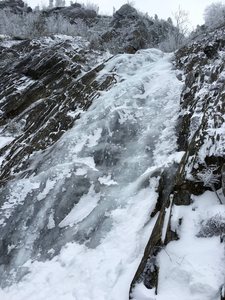 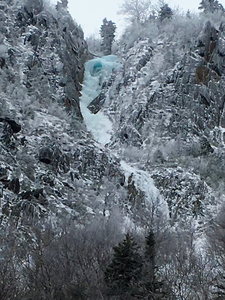 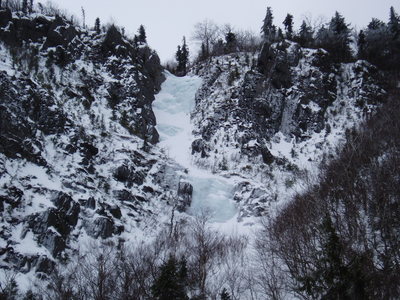 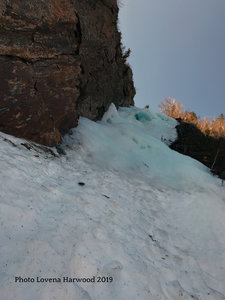 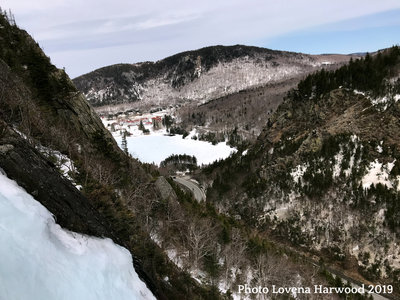 The Balsams from the cave belay. Photo taken 4.… 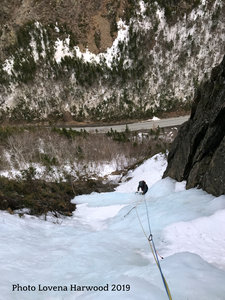 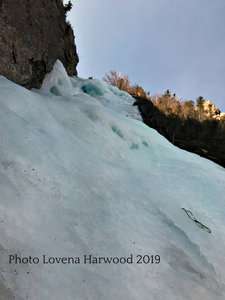 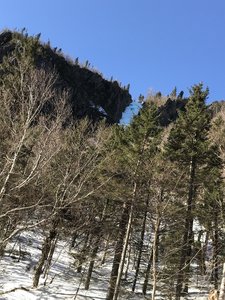 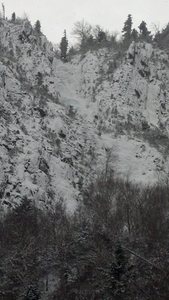