While the name of the route implies you'll climb the corner, you really climb the face just to the right of the corner with the occasional stem out to the left face.

Pitch 1 and 2 (55m): With a sixty meter rope, P1 and P2 can be combined easily. From the base of the corner, climb easy ground up to decent ledge and small roof above. Clip a piton and pull the awkward roof (crux) to clip another piton and a few bolts to the first belay (fixed gear). Continue up the fun and easy (but pretty polished) face clipping bolts and pitons along the way. The guidebook shows only a few pitons or bolts but the route has seen a retrobolting job and now has a fair number of bolts for lead protection and for belays. Belay from a fixed gear belay when you're nearly out of rope.

Eight single length runners and a couple of camalots from .75 to 2 to supplement the pitons and bolts would be adequate. You could find more pro opportunities if you wanted. Expect it to feel a bit runout if just clipping pitons and bolts. All belays are fixed gear belays.

Two 25m rappels down the tower's south side with a short hike around the tower's west side to the base of the route. Bring your hiking shoes. Do NOT thread your rope through the big ring on the summit because pulling it will likely result in a stuck rope. Instead, downclimb six feet to a good ledge (exposed) to find a big rappel ring on the ledge. Rappel 25m straight down to another big rap ring. Rappel 25m to the ground. The last rappel goes down a fun-looking sport route which may have a party on it so be careful. It would be possible to TR this route from the rap station if you're looking for more climbing. 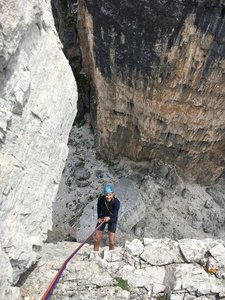 double rap off the southwest face. 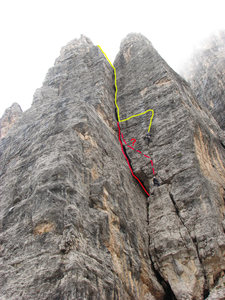 Tricky route-finding: The yellow line is where…

A party of 2 climbers high on the "Verschneidun… 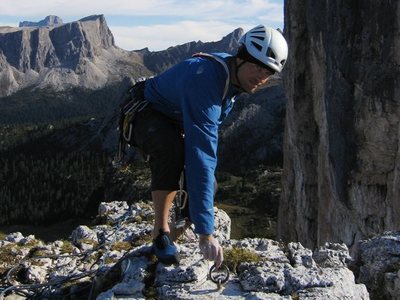 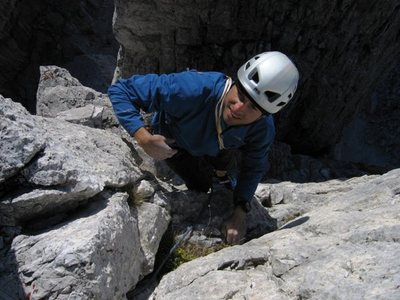 Top out on Torre Barancio. 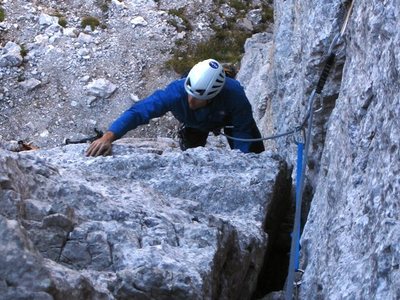 First pitch of the NW Corner of Torre Barancio.