Climb up to shallow arches and move left through them until you can climb besides the giant corner arch for a long pitch and belay to the left of corner arch (This is how I climbed it, the D.O.C. may have remained in the corner arch. There is no way of knowing because they left no fixed pins.) Move right from the belay and enter the left facing corner section and climb it to belay left besides the ceiling arch (This section was filled with large black lichen on the slab. It was wire brushed and a 6" lost arrow was fixed (A-0) so that this section could be freed at (5-10b) later on. From the belay lead up ceiling arch climbing mostly slab moves until it reaches the bulging slab section (this section had three knife blade pinned (A-0) into a several inches wide ceiling flake again to enable fixed protection for free climbing past the bulge in the corner. After the bulge there is great stopper protection until it ends. Then go through break in large arch (5-6) to a long horizontal belay. The rest of it goes up through short ledges and trees at easy 5th classing. This return to the Great Circle climb was done by Andy Byerly and I in May, 1983-84?. F.F.A. was done by Ted Hammond in May 1983-84?. In 1986 I did a variation to pitch three by moving west and up avoiding the ceiling arch. It's a long run out (5-7+) to one solitary bolt. After bolt move up right (5-9) to the outside edge of the bulge (5-10) to the same inside corner finish. Also instead of the ceiling arch I top roped right and the left up the roof above the arch (5-11-) To lead this pitch nailing knife blades in horizontals will be necessary to protect it or bolting it. This variation ends above the break in the arch at the same belay.
When F.F.A was done by Tom Bowker, Ted Hammond and I. I led the first and second pitch (5-10b) and Ted led the third ceiling pitch (5-10c). Significantly we were dressed for summer. Before Ted got to the pins during the (5-8+) run out to them, The sunny day weather turned into being in likeness to winter with high winds and snowing forty five minutes. Ted had to remain stuck holding on precariously until the the sunshine came back and dried the cliff off in minutes. Ted held his stance and then completed the pitch entirely free. The first pitch has some options to the way up it but the corner arch itself is the worst option because it is very dirty and usually has moisture seeping out of it.

The corner arch that sweep upward and west that is the perimeter bulwark of the east side boiler plates.

fixed pins and probably deteriorated. Unless people have been climbing the lichen will have grown back on the second pitch. The rappel anchor to Spare Ribs is to the left before the end of the third pitch through the break in the arch. 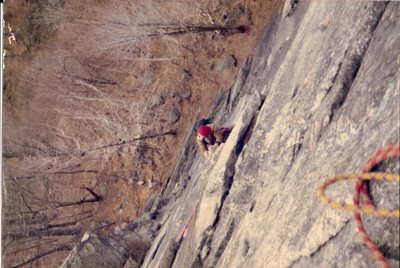 Scanned photo of myself following the (5.8) pit… 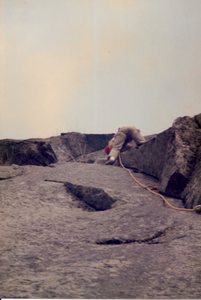 Scanned photo. I did the 1st free ascent of thi…