Routes in Keyboard of the Winds

This route is reminiscent of the White Whale at Lumpy Ridge, but is a bit more serious at the top and longer overall. The rock quality is excellent. The route ascends the rounded arete and left-facing dihedral system up the center of farthest left tower of significance in the Keyboard of the Winds. Let's call it Tower One, which is maybe 500 feet right (SW) from the top of The Trough on the Keyhole Route. The easy going ends at overlapping rock near the top. Move left into a left-facing corner system and climb it straight to the summit. This can be avoided by traversing around to the left, but then you miss the spectacular summit.

Approach via Black Lake and the trail that continues to the broad shelf beneath Spearhead. Hike to a point just east of Spearhead then head east and scramble up the low rib just south of the lower section of The Trough. Work around the right or left side of a prominent spire low on the arete of Tower One and gain the crest of the ridge.

To descend from the summit, down-climb to a notch on the Longs Peak side of the tower. Unfortunately the easiest return to Black Lake is to go back whence you came. From the notch, scramble around to the southwest side of the tower and descend the gully (Tower Gully) between Tower One and Tower Two. Another option is to traverse several hundred feet east and climb to the Narrows of The Keyhole route (Class 4) and descend The Trough all the way to trail above Black Lake. It is NOT easier to descend behind the Keyboard towers to the col at the east ridge of Pagoda, though it may seem a good idea in theory. The west side of the Dark Tower forms a steep cliff band that continues without interruption into the cirque of Keplinger's Couloir. An old iron piton (stamped "MADE IN AUSTRIA") indicates a previous rappel of the cliff. I down-climbed the cliff in approach shoes, though this is not recommended.

Viewed from Glacier Gorge, this beautiful tower is the penultimate feature in the Keyboard of the Winds counting left from the Longs-Pagoda Col. There is one more pinnacle to the left, but it does not look to have much merrit as a climb.

Crack gear from 0.25 inches to 2 inches. Keep in mind that I free soloed this climb so I am just guessing on gear and number of pitches. 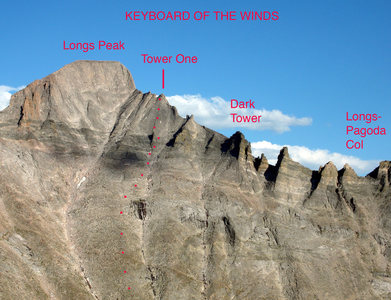 View of the Keyboard of The Winds from Arrowhea… 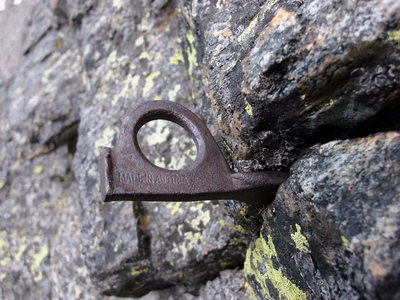 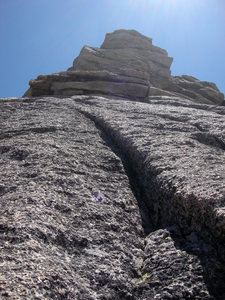 This is the penultimate pitch. The final pitch… 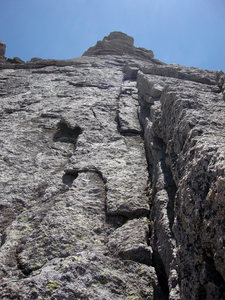 This is the long left-facing dihedral system th… 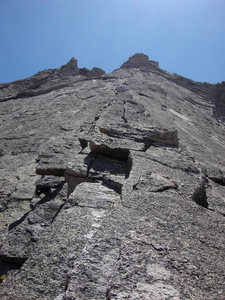 The view is straight up the line of ascent. Th…

More About Key of Free