This route will test your stemming skills. It appears to be an easy slab/dihedral till you get about halfway up and realize your fingertips are about to fall off from the awesome crimps and cracks on a slightly overhanging finish that can leave you breathless.

Most historians will agree that the history of Spearfish Canyon can be classified into two eras; BC (Before Cronin) and PC (Post Cronin). I would argue that Spearfish Canyon Climbing can be broken up into three, maybe four eras. The Pre-Junek era took place when I was in high school in the early nineties. This was when wide-eyed, bushy tailed kids like Greg Parker, Nate Renner and myself were running around Spearfish Canyon without any real purpose in life until we met Pete deLannoy. Our small, rag-tag group of newly annointed climbing enthusiasts had no idea that other stellar climbing locals, like Skeletal Remains, existed in our backyard. Then Pete took us to Mohican and our teenage souls experienced a whole new level of stoke and confidence.

I did a two year stint at BHSU during what was known as the "Old School Age of Development". Scrawny, strong-dudes, like Mike Cronin, and Blake Workmen, were starting to come into their own. After I finally got a redpoint on a hard 5.8 known as The Joker, I announced I was trading in my rope for a surfboard, and Cronin told me they were going to "bolt the whole planet." I told them good luck with that and proceeded to spend a decade in another part of the planet.

When I returned to Spearfish, a new era, "The Yellowbook Era" was in full swing and everyone was running around with Bruce Junek's yellow bible, hopping on the well versed routes on the Mohican Wall, the Sunshine Wall and a crazy place called Blue Sky. Myself, and about a dozen other local climbers played catch-up on The Sunshine Wall, thanks to the moderate classics bolted by Mike McNeil. Then, one magical day, the floodgate opened for those of us, who had been looking over our shoulders, while climbing the Big Black Face. We laced our hiking boots up tight and wandered over to the Northern Shores of Spearfish Creek and found newly bolted lines with hand scrawled plaques at their bases. These routes were being put up by brave, young men, who after graduating from BHSU, decided to make their own climbing scene since they had climbed every climb in Junek's yellow book ten times over and, in their wide-open minds, a new frontier had to be claimed and converted to Canyon Christendom.

This "New Skool" era broke out of the primordial ooze and some of us newly painted die-hards began running around the far reaches of the upper canyon penciling in these New Skool climbs in our thin, yellow guidebooks. In addition to new areas, new routes started popping up next to old classic lines. It soon became apparent that these New Skool developers, like Jamie Coin and Lee Terveen, had taken Pete's torch and were running wild with it setting Spearfish Canyon ablaze with radically fun, hard as hell routes like "Peace Pipe" and "Plastered Bastard". Once the yellow book became obsolete, word of mouth was your only hope, and we, the locals, met in dank watering holes telling each other about our newest projects that we were trying to redpoint. We became the ultimate climbing hipsters describing routes that had bolts so new they had not a scratch on them and the holes were still steaming from Lee and Jamie's prolific drill bits. We, the locals, prided ourselves in the cloak of secrecy and giggled at Minnisota climbers, who had no clue of the gems Spearfish Canyon truly held,as they thumbed their way though that highly sought after yellow book.

This New Skool era of child-like joy and discovery lasted longer than it should have because rumors of a "new guidebook" just kept getting older and dustier as a supposed publication date kept get putting pushed farther and farther into an uncertain future. Then one day, Mike Cronin made good on his promise and the new guidebook came just in time for Christmas and the Post-Cronin era came into being. And guess what? A select few of us are still penciling in new routes into the Cronin book, giggling behind your backs and saying things like, "If you like this climb, then you should try this NEW one." The Joneses keep sprinting ahead. Just admit to yourself that there is no hope in keeping up.

Buffalo Gap is an example of classic, old school route. It has continuously challenged me and kept me in shape for many years. It stands out in my book as a must do since it helped make it possible to get strong for all these New Skool lines that have popped into existence over the years. Have fun! 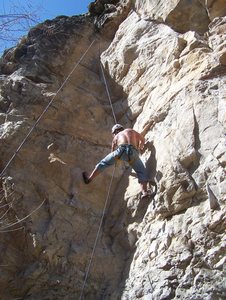