Routes in Andrews Creek & The Gash

Flour Power Couloir starts from The Gash below the headwall that sits beneath Andrews Tarn. It goes up the south face of Otis Peak and tops out just east of the summit.

The couloir is roughly 1000' in height and when conditions are right makes for a nice snow climb similar in quality to Dragon's Tail Couloir. For the most part, Flour Power Couloir is very narrow (roughly 15' across) and a little curvy which gives it a nice character. You can never see the top until you're there.

The main difficulties consist of a possible water ice step about 1/3 of the way up the couloir and a steep snowfield just below the ridge crest. The possible water ice step is short (perhaps 15') and no harder than WI2. Depending on conditions the ice may be avoided by some 3rd class scrambling on climber's left. The snow is steepest at the very top where the couloir opens into a wide snowfield. At its steepest, this part of Flour Power Couloir may exceed 60 degrees. (The rest of the couloir is probably in the 45 degree range or mellower.)

I believe that one reason this couloir has not become as popular as some of the less interesting Front Range classics (like Dead Dog, Sky Walker, and Dragon's Tail) is that it has a very short season. It is south-facing and has a large snowfield at its top, which makes it avalanche prone early in the season and melted out later in the season. Nevertheless, when it's in, I believe it is the peer to any of the other Front Range classics, or even superior.

A note on the name: our 2009 party had been making attempts at this couloir since 2007 and had been thwarted by poor conditions and weather. During this process, we affectionately referred to the couloir as "Flour Power" due to its proximity to Flower Tower, our affinity for puns, and our lack of knowledge of any existing name or first ascent party. I'd be more than happy to give the couloir its proper name and attribute the first ascent if one has been made before ours.

The route is on the south face of Otis Peak and begins at The Gash (below the headwall that sits beneath Andrews Tarn) and heads straight up towards the summit. The couloir tops out on Otis Peak's east ridge just 100' east of the summit. The logical descent route is to descend the west ridge to the divide and then descend Andrews Glacier and return to Glacier Gorge Trailhead the way you came.

When conditions are ideal no protection is necessary. The walls of the couloir will probably take rock pro so a light rock rack may be useful if you really want to protect the climb. The snow is steepest (perhaps steeper than 60 degrees) at the top where the couloir opens up into a wide snowfield. Pickets would be the only possible way to protect this section. 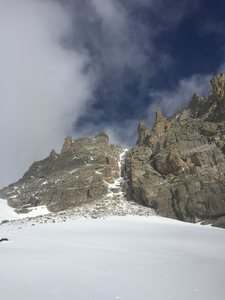 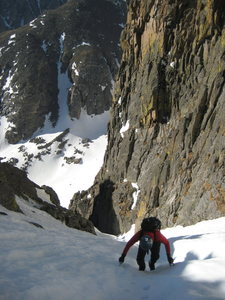 James, about half-way up the route. 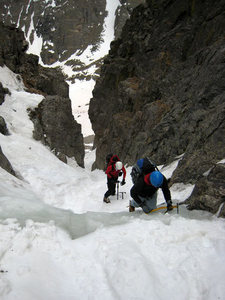 Tackling the water ice step about 1/3 of the wa… 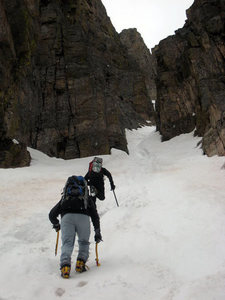 The beginning of Flour Power Couloir. 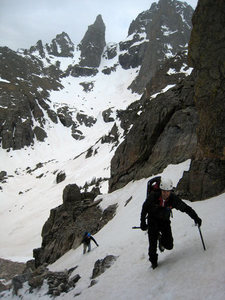 The very beginning of the couloir. The Sharkst… 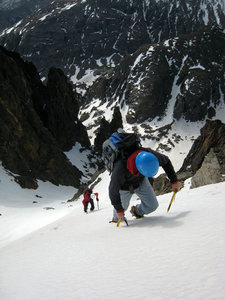 Near the top of Flour Power Couloir. This is t…