The route ascends the broad ridge enclosing the east (left) side of Mount Baker's north face. It is supposed to be a moderately technical route on Mount Baker but we found it to be committing and long. Negotiating the serac wall several hundred feet to the right from its apex, over the north face required some WI4 ice climbing. 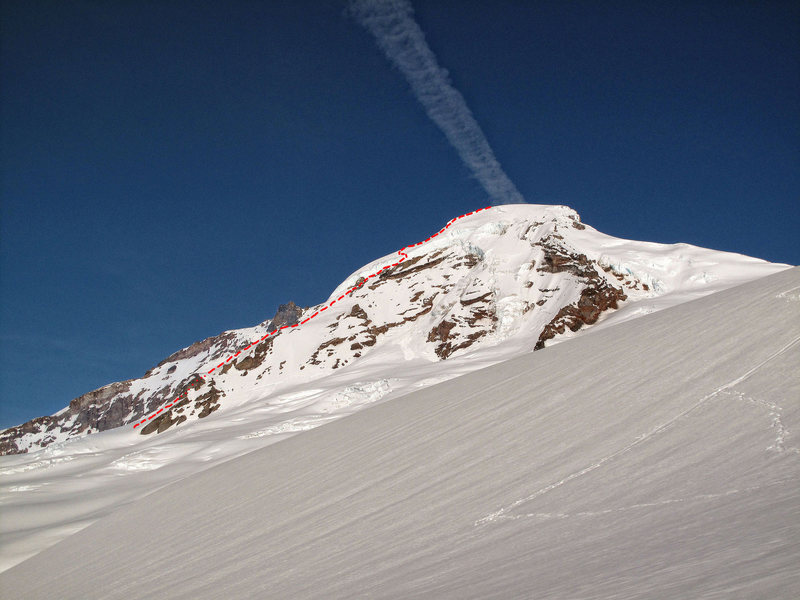 Mt. Baker. North Ridge with the overlay topo of our ascent (the route normally does not traverse this far to the right).

To access the North Ridge, cross Coleman Glacier laterally until at the base of the ridge. From here ascend the snow slopes to the left of the ridge (crevasse crossings). In the early season and if the snow conditions allow it, the ridge can also be gained from the right (some rockfall danger). Once on the ridge, continue towards the serac. Find your way through the ice cliff and proceed on more gradual snow/ice towards the summit cap. The last few hundred feet becomes steeper, with large exposure over the west face and a possible crevasse crossing near the summit plateau.  Later in the season this section apparently becomes solidified and a "secret passage" can be found to the left of the steep section and over the crevasses. From the summit cap the true summit is reached by a ~20min walk. 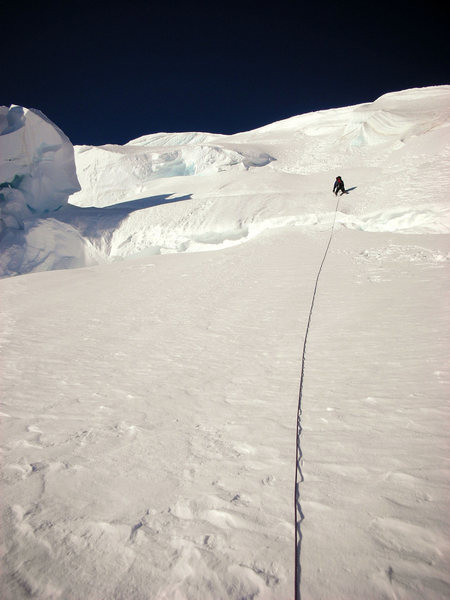 Ascending the initial snow slopes towards the ridge. 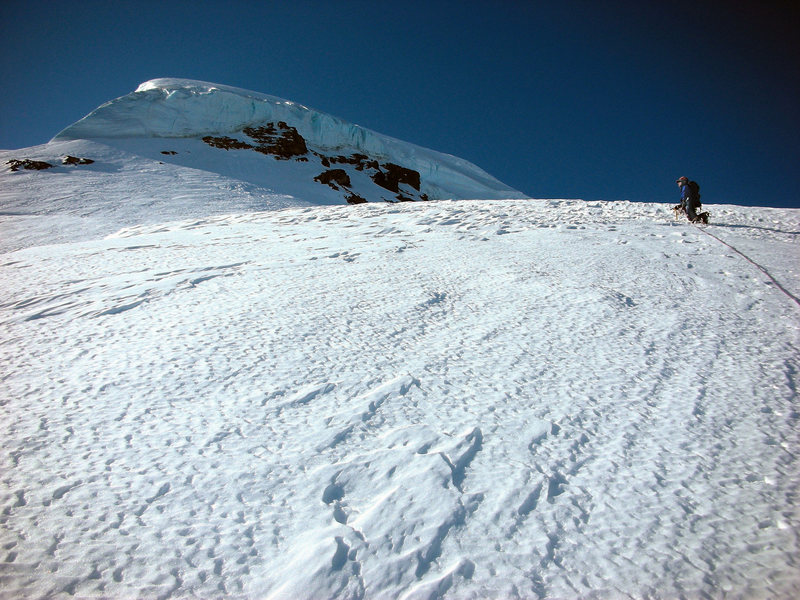 Climbing towards the serac wall on the lower North Ridge.

The serac walls can be climbed to the left of the apex of the ice (these pitches can't be seen from the ridge until the traverse left is completed), or often there is a more direct line just right of the ridge crest that may be easier ice climbing or thin ice and mixed.  Some parties choose instead to negotiate the serac walls on the right where they are steeper (the traverse may have little reliable pro). Climbing the seracs there may involve semi-hanging belay off two screws and ascending a 50ft section of 70-80 degree ice (WI4-?). 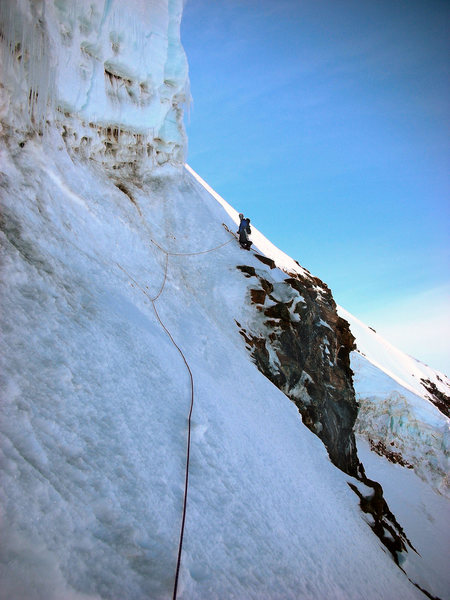 Belay over the north face.

The climb will take the average party 12-18 hours from the Heliotrope ridge camp.

Cascade Climbers website is an excellent source of most recent trip reports and route conditions. Here's a trip report showing climbers ascending the serac wall on the left, near its apex: trip report 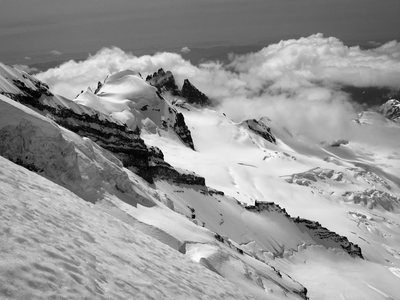 Mt. Baker. View of the Roman Nose from the Nort… 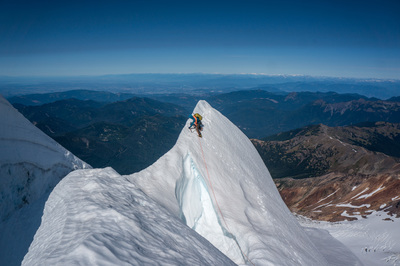 This route is rad! 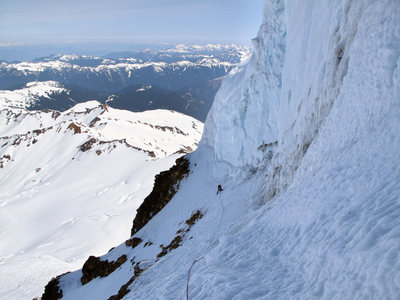 Traverse under the serac wall. 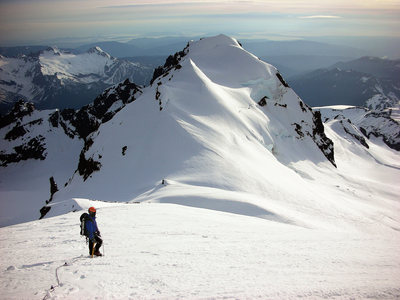 Above the Ice Pitch and above the clouds 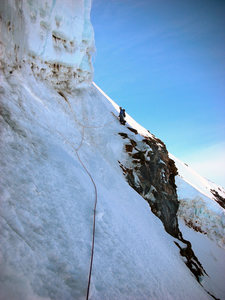 Belay over the north face. 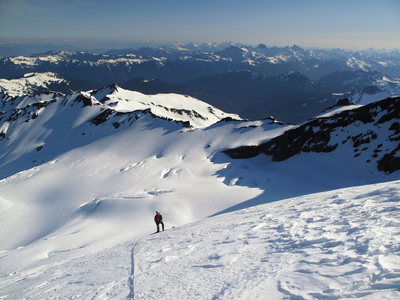 Mt. Baker. Henning Boldt on the lower slopes of… 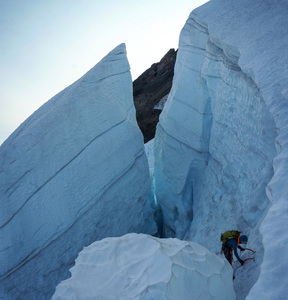 Climbing up to the ridge proper in late season… 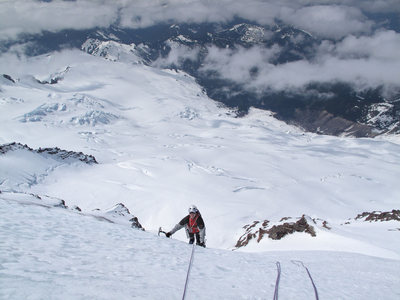 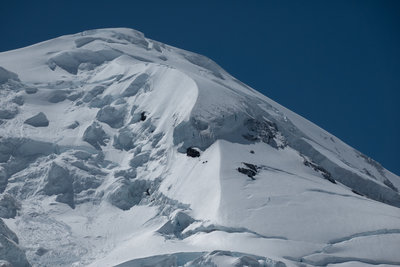 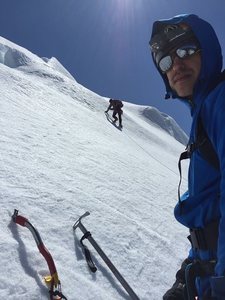 Climbing the ice pitches climbers right of the…