Enter The Dragon (aka Old Route)

Routes in Flattop Mountain - S side

Enter The Dragon roughly follows the line of a rarely done summer rock route known as Old Route (5.7). As a mixed climb, the route offers six quality pitches of moderate but strenuous climbing to a great summit.

The route has likely been climbed as a mixed route before, so maybe this is just a rediscovery of an old route for a new generation. With that in mind, it's not too much of a stretch to give the mixed route a new name, like the route Left Chimney, which was often overlooked until someone renamed it Dreamweaver.

Enter The Dragon climbs the center of the south face of the Dragon Tail. Start by climbing up the Dead Elk Couloir and traversing into the top of a large snow ledge.

P1: Climb an iced up, right-facing corner system for a forty feet. Run the rope up easier terrain and belay on the left (150 feet, M4).

P2: Climb blocky, mixed terrain on the left side of the gully system past a pair of crux bulges. Again, belay on the left about 30 feet down from a steep chimney (150 feet, M4).

P3: Kick steps up and right, and climb the steep chimney past a fragile snow mushroom (unless you're lucky) then up easier terrain to a belay on the right (150 feet, M4).

P4: Climb up the left side of the gully past a short squeeze chimney with great featured rock then through a small overhang. Once past the overhang, angle up and right towards a notch in the southeast ridge of the Dragon Tail (150 feet, M4-).

P5: Climb up to the notch the work your way up the south west ridge until its possible to break right on a ledge system leading to the base of the east face of the summit block (100 feet, 5.6).

P6: We didn't climb pitch 6 due to the usual assortment of excuses: cold hands, bad weather, approaching darkness, etc. From the view from our highpoint and by looking at pictures later on, there looked to be about one pitch of 5.7 terrain remaining through steep but featured terrain.

From the summit or the route, descend north then down the Dragon Tail Couloir. It looks like it is possible to descend east from the notch in the south east ridge but having fallen for this trap, I don't recommend it. A huge overhang is directly below, with the lip of the overhang about 180 feet above couloir. You may find yourself hanging in the middle of space wondering what to do next. If you have to bail, rappelling the line of ascent will greatly reduce your chances of having a really bad day.

Cams to a #3, stoppers, one specter, one thin knife blade an maybe a few other pins. 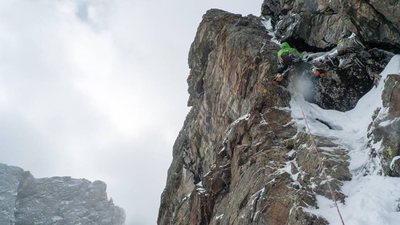 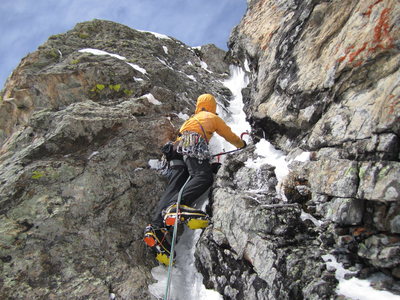 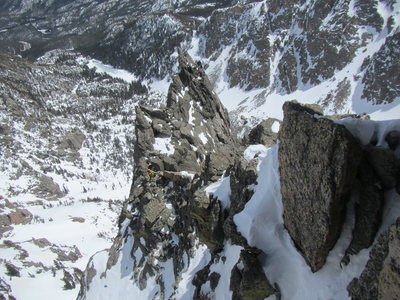 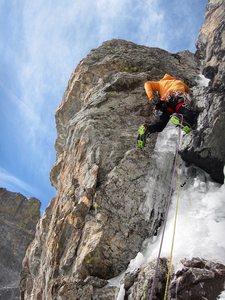 Austin Lorehn going full Bruce Lee on what was… 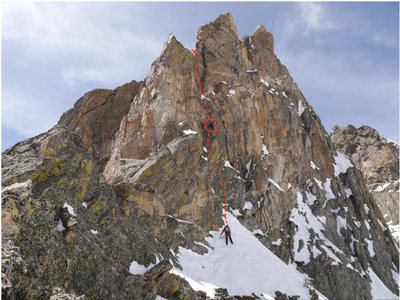 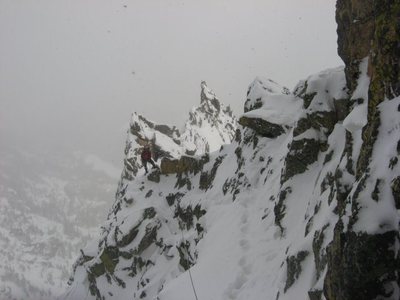 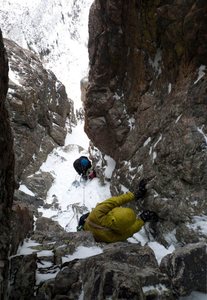 Looking down pitch 4, I think. 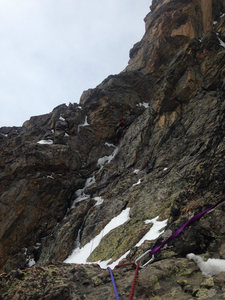 This was our second pitch. You can make out whe… 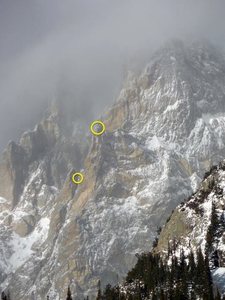 The lower circle shows where most people finish… 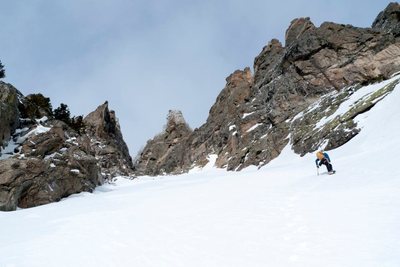 JD on the approach. 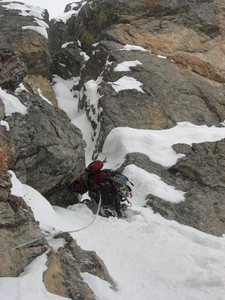 Chris Sheridan on the third pitch of Enter The… 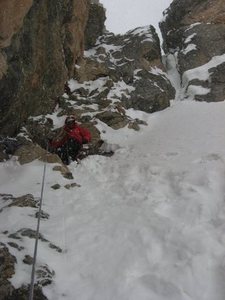 Chris Sheridan at the top of the pitch of Enter…

More About Enter The Dragon (aka Old Route)