Routes in j. The Yellow Wall and The Seasons

Scary Area involves wild climbing out huge roofs, complicated gear, and difficult route-finding. It is quite a step up from its neighbors, The Yellow Wall and Carbs and Caffeine.

P1: Begin from the stacked blocks ledge where The Yellow Wall starts. Scary Area face climbs up to an obvious bolt (a newer bolt right next to an old relic). There is a horizontal that accepts dubious gear on the way to the bolt, but stick-clipping might be a better idea to avoid an ankle-breaking landing. The climbing up the bolt is 5.11, and beyond is committing 5.11+. Don't worry, there is gear up there! Above the first jug on the climb is a glue-in bolt that presently (2009) has some static line connecting it to some fixed hexes in a horizontal above. Climb past this and wander up and slightly left to more gear placements. Continue up to an obvious belay stance at a huge right-facing flake/corner. Currently (2009) there is a fixed belay here of a pin, two wires, and a bunch of green rope. This pitch in and of itself makes a great 11+ lead.

P2: This is the business. From the belay, step down and right to a stance on a ledge, then work straight right and back up at a sketchy left-facing flake (R) to a horizontal with a pin. This pin is visible from the belay, and the horizontal takes good gear. From here climb up and slightly left heading towards the monster roofs, more horizontals, and gear placements. Back cleaning gear, or the use of double ropes would be helpful. Once under the big roofs, hand traverse straight right to a cool, exposed stance. Arrange some gear here, and then bust out the roof at a weakness (crucial red Alien placements here and a small wire at the lip) just left of the Carbs and Caffeine roof. This seemed very much 5.12. Once over the lip, step around the corner to the right and belay off 5 or 6 rusty fixed wires. 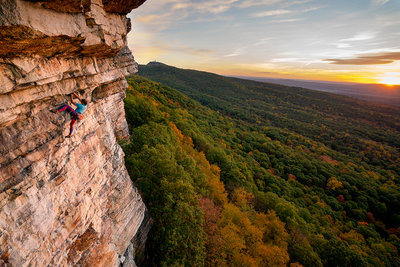 I started up the first pitch in the dark for th… 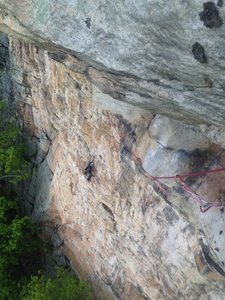 first attempt with my homie Jon 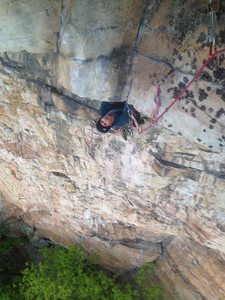 Jon about to do some bouldering high in the sky 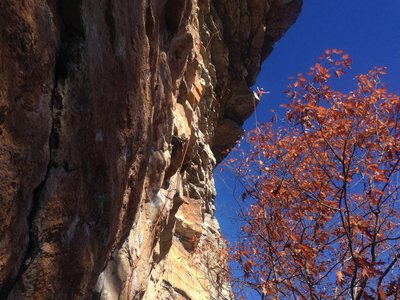 A wild one! Climbed as one mega-pitch (lots…