Routes in The Old Settler

Some logging roads have gates that are locked when active logging is occurring. Check in advance with a phone call to Lakeside Pacific, the tenure-holding forest company: 604 793 9340. Keys can generally be picked up from their Chilliwack office during normal business hours, or at the logging camp by prearrangement.

This route takes the broad buttress dropping west from the west-central summit of the Settler. The first half is Class 3 and 4 scrambling, then follow several pitches of mid-5th and finally a series of steeper pitches with sustained 5.7-5.8 climbing.

The start of this route is c. 150m down and left of the starts of Duck a L'orange and Black September at the SW corner of the buttress. There are, however, numerous possible starts, all of which are pretty scrambly at the bottom.

The best descent involves downclimbing 60m north off the west-central summit to the col with the north summit, then downclimbing the 3rd class ramps of the standard route to talus below the west face.

Although the first ascent reported long runouts and difficulty in finding pro placements, this was before the regular use of cams in alpine climbing. Today, a modern rack with an emphasis on finger to hand-sized pro suffices. 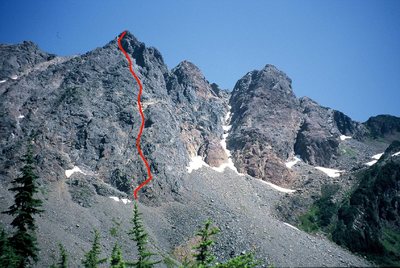 Photo topo showing the general line of the Down…