These bold gentlemen did this line in 1974. Dave was known for climbing much of the hard rock and bold lines in the area. Finding out about these routes were often only via word of mouth, rumors and luck. More than one aspiring climber has told the tale of telling their buddy's about a new line they did over a beer, only to hear something like "I think Dave Jensen and (insert a lot of names here) did that in the early 70's. For this route, hard aid climbing in a remote location on poor (limestone) rock with a hammock bivouac followed by a ledge bivouac. Dave Jensen had this to say about the 2 routes he did on this large face: "Poor rock and dangerous on both climbs. A lot of work hauling in there. Mark Hauter of LaGrande tried unsuccessfully to free the V back in the 1990s--got up 300 ft. It is about 1200 ft. in all."

Mark had this to say about his later free attempt: "the line I attempted was a different variation from the left hand route. I managed to free an alternative start after awkward drilling of two bolts and making some scared moves on rotten, wet rock. I have been thinking of that face ever since (that was in 88') and believe it would make a killer winter mixed route; a burly undertaking given the approach exposure and remoteness. Maybe a fly by would be in order, it could save a lot of energy. I have been climbing on that rock type a lot and it is definitely better/more secure when frozen. It is permeable!! It would be a good adventure!"

Inside of the Eagle Cap Wilderness Area 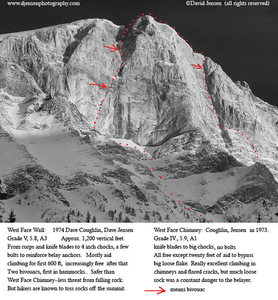 The awe inspiring West Face of the Matterhorn.…