10% Meteorological Vinculation (or TPMV for shot) is a classic 4 pitch excursion up the entirety of the Lower Wall.  Most often only the spectacular short version of p1 (via Japanese Gardens, .11+) is climbed. The original aid version of this route had 5 pitches (5.8 A4). The free version really only has 4, as the original second pitch is best combined with p1.

P1 (Original): Formerly the last remaining bit of aid on the original TPMV, this section was free climbed recently at 5.14-. See neighboring entry "10% Direct (En Passant)". This is also an excellent C1/2 climb and in years past was often used as a place to practice hanging belays and setting up hammocks/portaledges.  For many years there was a two bolt anchor about 40’ up to facilitate aid practice.

P1 (Japanese Gardens to TPMV):  This pitch is most often done as a standalone climb by beginning on P1 of Japanese Gardens and then stepping left at the first (short) anchor. The rest of the pitch follows shallow corners and cracks past 3 bolts and gear to another anchor (.11+).

P1 (Extended): Climb the Japanese Gardens P1/TPMV linkup as described above but keep continue past the anchor. The section above consists of a difficult height dependent bouldery section protected by good but small gear (.12c-.13a). The gear must be placed well, otherwise the fall onto the P1 anchor is fairly substantial. As such, it is a mandatory strategy if free climbing to climb this as one pitch from the ground. This extension is basically the old "Chopper Flake" pitch 2 of TPMV; see "History" for more information about the flake.

P2: This was actually P3 of the original aid climb. Climb cracks up a RFC to a comfortable ledge.  From there face climbing angles left to an anchor below the obvious corner start of the slab pitch (fun 5.10-, slightly runout).

P3: Fantastic, challenging pitch of slab and corner. Traverse left and up from the anchor and do a committing and slightly scary move back right to clip the first bolt. Continue up the difficult corner via bolts and gear, then follow the left-trending dike until you can step right to a ledge with an anchor via runout 5.9 climbing. Alternately, continue up the dike and over the roof to join Newest Industry. This pitch can also be approached via P1-2 of Japanese Gardens and is well worth the trip either way (.11b/c).

P4: This pitch climbs a slab past a bolt and some gear to a tough little mantle past a bolt. (5.10d) Cracks then lead near the anchor on top of Newest Industry, but 10% continues on via three slab options: a) climb out right and then up over some overlaps to the anchor (5.8). At one point there was a bolt and a pin on this variation. b) continue straight up past 2 bolts to the anchor. This variation has the best protection (5.9). c) an easier variation with less protection climbs to the left before arching back to the right to the anchor. It should be noted that a fun alternate finish that joins Japanese Gardens can be climbed by following a ramp up and right to join JG on its last pitch (5.11).

Starts via thin cracks just to the right of Sagittarius.

Nuts and cams to #4 Camalot (for the section on Japanese Gardens) with emphasis on finger size cams; word on the street is that a micronut or small cam can be used to protect the crux on the extended P1.

Descent is usually possible with one 70m rope in this section of the wall, but for peace of mind bring two that are at least 60m. All anchors mentioned above are bolted and currently have chains.

When first climbed this was one of the most varied and difficult aid routes at Index. The upper slab involved some hooking and copper heading along with some mandatory free climbing.  Although tame compared to modern standards, in the mid-70s it was fairly heady stuff - especially in the rain. When it was first climbed p1 ended below a long rectangular flake that was approximately three feet wide at its base.  The flake was only attached at the base and rose a couple of body lengths to the bottom of the sentry box chimney. Near the top, the width increased to 4 1/2'. From there one could climb straight up to a sentry box/chimney or move right to join Japanese Gardens. This flake, dubbed "chopper flake", was either aided or free climbed. It flexed significantly and was a bit of a death trap. A couple of scoundrels pried it off, thus exposing a new section of rock, materially changing the nature of the route while potentially saving a life or two.

Here is a link to a photo showing “Chopper Flake.” It was taken from the 1975 Beckey guide (Photos out of guidebooks posted on MP will cause the poster to be perma banned so the link below is to Imgur). At first glance it may be hard to see the flake. The right side is clearly delineated and you can see how close it came to JG. Between the flake and JG was a bolt so if you fell leaving the flake you would pull it off. Moving right off the flake was scary because the flake moved so! Less scary was moving up and left. In this photo the sentry box/chimney is still occupied by a tree. i.imgur.com/hzHUBbU.jpg

The 1982 Brooks/Whitelaw guide suggested climbing a long p1 to a belay at the sentry box tree. From there it described the next belay as being partway up the slab. This method avoided a hanging belay directly below chopper flake but encouraged the leader to pass a bolted anchor on a comfortable ledge in favor a hanging belay 40’ higher. This suggests that additional bolted anchors were added post first ascent. Perhaps the FA discovering things on lead established belays in less than optimal locations and subsequent parties added improvements.

Sadly, both first ascentionists of this route died in the mountains: Dave Anderson in a helicopter accident and Bruce Carson falling through a cornice in the Himalaya. Here is Bruce's obituary in the AAJ penned by Royal Robbins: publications.americanalpine…

Is it odd that a team who were visionary and committed to clean climbing made the FA of a route that required perhaps the longest section of copper heading (although low angle) at the Town Walls? Most of Bruce and Dave's pioneering clean climbing took place just months after they put up 10%.

The transformation from aid test piece to free climb took decades. Pitches were freed from the top down with the first 50' being the last to be free climbed. Unfortunately, the 5.14 or 5.13 rating for p1 limits traffic on the upper pitches. These pitches offer excellent climbing and are well worth the effort to climb. Japanese Gardens/10% is a fantastic combination. 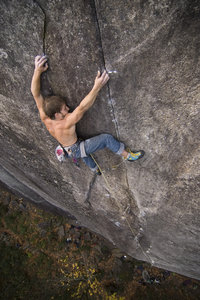 Ben Gilkison on the FFA of the full first pitch… 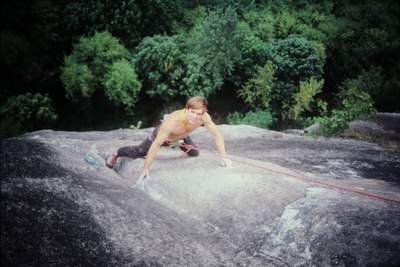 Darryl Cramer on the FA of pitch 3. Photo by Gr… 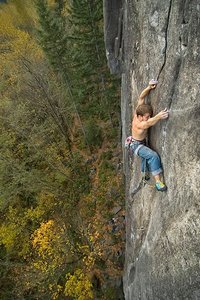 Another perspective of Ben Gilkison on the FFA… 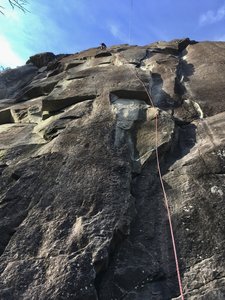 Michael Telstad pulling onto jugs after the cru… 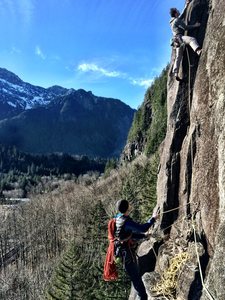 Pitch 3. on a beautiful January day.