The Horse and Pony Show

This adventurous climb tackles a section of white and tan cliff that appears virtually blank from the trail. Upon closer inspection, you realize that the face is littered with horizontal seams and consists of hard, compact quartzite. In many places lime has washed over the rock to create a highly textured and solid climbing surface.

The Horse and Pony Show has a great, adventurous feel but is totally safe and enjoyable. Of course, if you're used to clipping bolts at Rifle, this route may have you on edge as you lock off on a horizontal to take a peek and wiggle in a cam. Two of the pitches are fully sport bolted and the rest take a healthy mix of gear and bolts.

The route receives great morning sun until about noon and is slightly overhanging from bottom to top.

Pitch 1 (5.10a) 45 feet, one bolt and gear to #2.5 Friend.: Look for a bolt with a brownish red-colored hanger about 10 feet up. Climb an initial, pumpy section to the first bolt and above, placing gear in multiple horizontal seams. The difficulty eases before the ledge. Finish at large ledge with a two-bolt belay.

Pitch 2 (5.11b) 140 feet, 10 bolts and gear to #2.5 Friend: A great, long pitch. Traverse right from the first pitch anchor and climb long pitch. Place a piece in a horizontal before clipping the first bolt. Above, plug pieces in horizontals, clipping the occasional bolt. About halfway up the pitch there is a section of rock that is reminiscent of sandstone but is well protected with bolts. Above, the rock turns into super-hard quartzite, climbing the face just left of a small corner feature. A few bolts protect this section which is probably the crux for most people. Finish by climbing into the small corner feature and pulling on to a broad ledge with a bolt at its left edge, protecting the final moves to the anchor. The two-bolt anchor is a few feet to the right of the pitch.

Pitch 3 (5.11b) 60 feet, 3 bolts and gear to #2 Friend: This pitch features beautiful, orange, limestone-like rock on the face left of crack/corner feature. Climb down and left from the anchor, clipping the bolt on the ledge to protect the initial moves. Climb on to the face, left of the crack/corner feature and place gear in the first horizontal. Then, downclimb and back clean the bolt. Above the first horizontal, face climb at a moderate grade with gear in horizontals to one bolt. Above, place more gear in horizontals before clipping the second bolt. Climb left of the second bolt and then back right to where you can clip the third and final bolt. Climb the crux moves at this bolt to easier climbing above. A green Alien protects the final moves to the anchor. Finish at a ledge with a three-bolt anchor.

Pitch 4 (5.1ad) 80 feet, 10 bolts: Starts by climbing small bulge to the left of belay and then up face above. There are a few bouldery cruxes with some good rests inbetween. The middle crux involves a section where its hard to stop and you have to fight the pump and keep going. The upper crux before the anchor is probably the hardest crux but you get a big no-hands rest before the crux. The rating is slightly height dependent (might be harder than 11d for short people). Finishes at a stance with a three-bolt anchor below the large chimney/crack feature.

Pitch 5 (5.11a) 80 feet, 7 bolts: Climb well-protected face to the right of the corner system with the ominous chimney.

Originally, this climb was envisioned to continue for two more pitches to the top of the formation but bad rock prompted us to end it at the top of pitch 5 in the interest of self-preservation.

When you get to the base of the wall you will need to go to the left, maybe 100 yards, passing a spot in a corner that has been cleared from the base of the wall (Jeff Achey's route called the Mudwall). Go another 30 yards past that spot. There is a large pine tree underneath the start of the route and a cairn at the base. Look for a bolt with a brownish red-colored hanger about 10 feet up.

A set of Friends to #2.5 Friend and many quickdraws and trad draws. Two ropes for rappel. 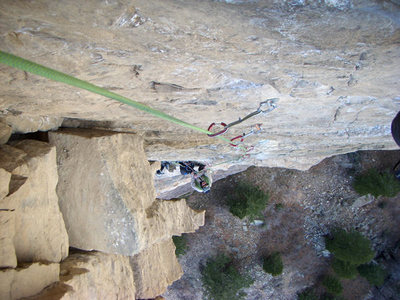 Looking down on p5. 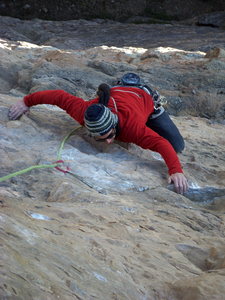 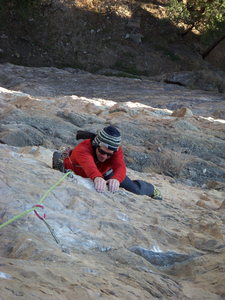 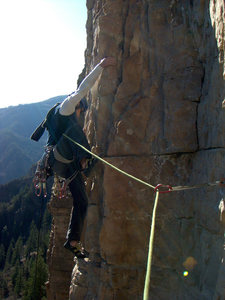 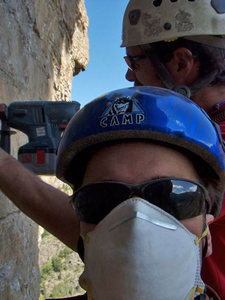 Team Danger day 1 of the FA. The masks kept the… 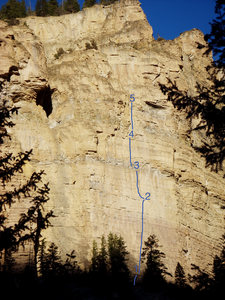 The Horse and Pony Show with the approximate lo… 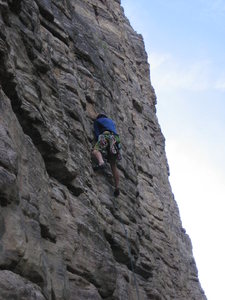 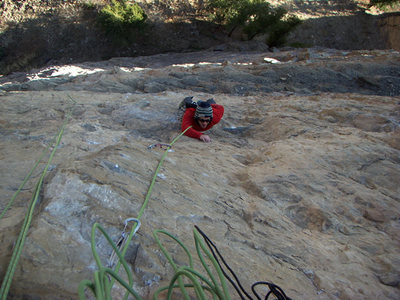 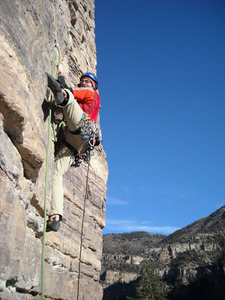 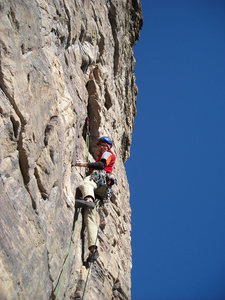 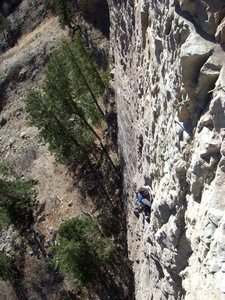 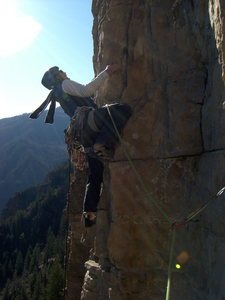 More About The Horse and Pony Show