Routes in The Jobsite

Yee haw! This line offers a good ol fashioned trad adventure in an increasingly domesticated canyon. The climbing is never too hard but the protection is just sparse and/or sketchy enough to keep your attention. The rock ranges from perfect (bullet quartzite on the first pitch) to kinda chossy (white Jobsite-esque stuff on sections of the fourth pitch), but is pretty good overall. Climbing this line will make you feel hardcore, even if youre not.

I recommend that anyone who gets on this route be very confident in their climbing ability and ability to place trad gear. While the climbing is never too hard, youve got to keep a cool head. Dont let that scare you away, though. Its a fun route and hey, its only 5.8, right? How hard can it be...

Check out route and beta photos to supplement the beta below. Pitch lengths are approximate.

Pitch 1: Start climbing in the cleft just left of a diamond-shaped feature. Follow this crack past a couple bushes and a 5.6 crux or two to a big ledge. The climbing is better than it looks. Set up a gear belay in a crack in a rock on the west side of the belay ledge. 5.6, 185

Pitch 2: Start up the nice-looking-but-short cracks in front of the belay, past a couple ledges. This will bring you to the base of another relatively steep cliff. Get some gear in and make some devious moves up the face, getting gear in some horizontal cracks and pockets. Head up to a bush/small tree, sling the tree, and belay on the large, sloping ledge above the tree. Use the wide crack (at the base of where the cliff meets the ledge) and a crack a few feet above it to set up the belay. 5.7+ PG-13, 165

Pitch 3: Walk/traverse right and down along the ledge, avoiding and passing a steep, dark, chossy dihedral. Climb up to a bush and onto the face above. Dont place any gear until you get onto the face above; rope drag would be absolutely heinous. The climber will be out of sight from the belay once he passes the bush. This pitch is similar to the previous pitch in terms of gear and climbing, but is a little easier and not as steep. The quality of gear is about the same, maybe even a bit worse. Belay at the base of the next cliff/pitch on an obvious big ledge. Use a short vertical crack to set up the belay. 5.7 PG-13, 120

Pitch 4: This is the most exciting pitch of the route, and is also the crux. Start in a shallow corner and climb up near the left arête of the cliff. Head toward a small roof. Instead of turning the roof, follow a crack that goes up and right, toward the corner/dihedral. Follow this to the top. Gear placements are relatively plentiful, but the rock is not very good in places and some of the cracks are flaring. Belay at the top using a couple horizontal cracks. Solid 5.8 PG-13, 95

Descent: From the top of the last pitch, walk north and then east into a drainage/basin, following the path of least resistance. Youll soon be at the top of a scree slope and see a tree growing in a notch in front of you. Instead of going through the notch, head north up some tame class 3 slabs (at the top of the scree gully) and then cut east along a vegetated (grass and some small plants) ledge system. Follow this over and then down. We found a faint trail that took us down toward (but a little west of) the Appendage. Follow the trail into the stream bed and back onto the main trail near George.

A set of C3s (these things are awesome!!!) and Camalots to #5, with doubles in Camalots from the smallest double-axled one to #3. Set of nuts. Tons of slings (we brought 7 and I wish we had more). 60m rope. Cordalettes or whatever you use to set up trad belays. Helmets. We took tricams and a #6 cam but didnt use them. 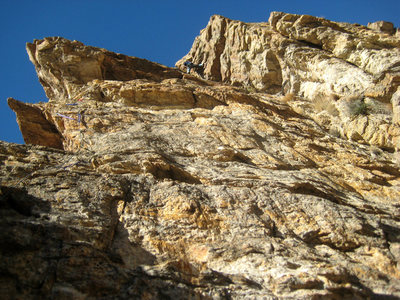 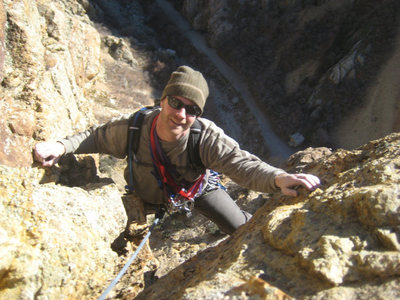 Christian topping out on pitch 4. 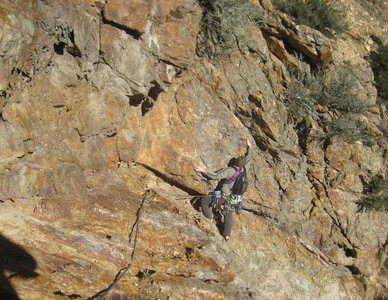 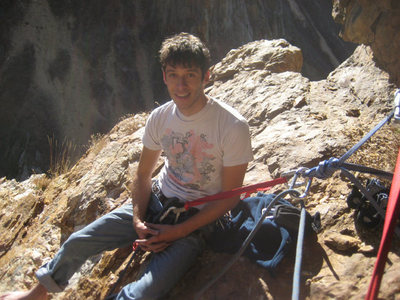 Me at the belay at the base of pitch 3. 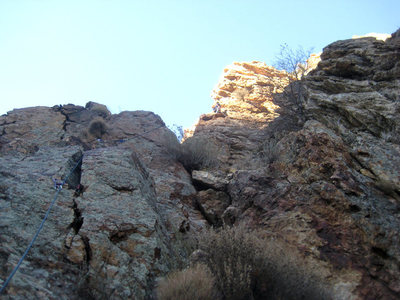 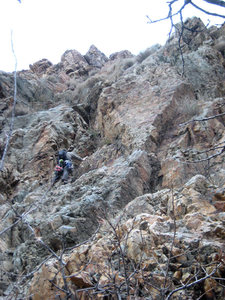 Christian on pitch 1. It's better than it looks. 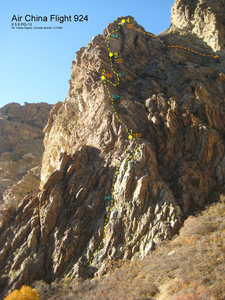