Tales From the Hard Side

This is a fantastic steep and bouldery route with two distinct cruxes, one after the second bolt and one just below the top. Gym rats and boulderers will love this one. Sequence through the first couple bolts is important to minimize the number of moves and to be clipping off the right holds.

Steepish climbing on jugs and edges lead to the second bolt where a wild balancy sequence starts involving a sloping sidepull and a huge right hand move to a full-hand flat edge. Easier climbing on medium to small edges gets you to the second crux just below the juggy horizontals a body length below the top. Either use a crimp on the right to gain the jugs, or use a bad shallow pinch on the left and make a big dyno right/up for the jug rail. Either way, latch the jugs, clip the last bolt and romp up 5-easy for a bodylength to the top.

Although this was originally rated 12b, a foothold broke sometime after I last climbed it (mid/late 90s), yielding a better foot, and consensus is that it's now quite a bit easier, with the grade settling around 11d. Also sounds like it has been re-bolted with the bolts in different places, which seems odd, as the route was safe enough before.

On the west side of Holiday Block, right of center, between Never Believe and Tuesday's Gone.

Although originally done as a trad route with some pre-placed gear, this was unfortunately retrobolted in the mid 90s. 4 bolts. 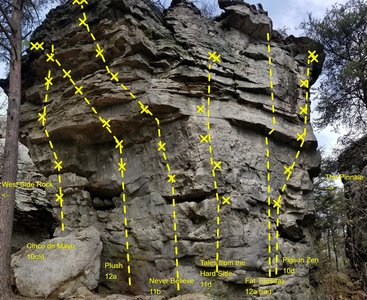 West side of Holiday Block, opposite side of th… 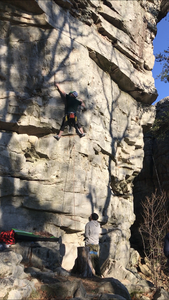 Griffin Ash getting into the side pull 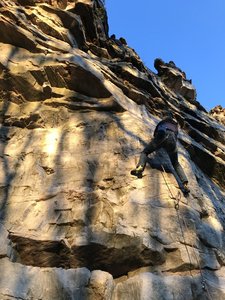 OG Josh Howard in between the two boulder problems

More About Tales From the Hard Side