Shortoff Mountain South: All routes between and including C.O and Paradigm Shift are closed.

Shortoff Mountain North: All climbing routes, cliff rim, and campsites within the red band marked on the map are closed to entry. No foot traffic or camping above or below the cliff in this section. Contact the USFS for more details: 828 652 2144.

Bynum Bluff: All routes are closed.

Ice Cream Direct takes an inspiring line up the steep white rock in the middle of the cliff. It has multiple cruxes, tricky gear, and elegant climbing.

Begin up a steep corner with three bolts. The climbing here is quite sequential and strenuous. Putting long slings on the bolts makes the climbing all the more heady, but you'll appreciate it when pulling the pumpy moves at the top of the headwall. Make a final long move to the ledge, step left, mantle, and sit down. Bring a newspaper and wait for your heartrate to return to normal.

From the ledge, cast off into the steep, white headwall. The seams above are thin though open up enough for gear every once in awhile. Be prepared to do hard 5.11 climbing with small gear below your feet. Beware the ledge below you. Pull a bulge, stuff some more gear, and make long, pumpy moves to the top of the headwall. At the base of the final roof, step slightly left and swing through huge holds straight up to the belay bolts shared with Phantom of the Opera and the Fat Lady.

Ice Cream direct starts up a steep right-facing corner with three bolts about 20 feet right of the start of the Fat Lady and about fifty feet left of Jeep's Chimney.

Three bolts at the bottom (long slings), then RPs and a double set of cams from small (#0 Metolius) to #.75 Camalot, and a #1 and #2 Camalot. I found a #2 LoweBall useful but not necessary. The guidebook, Selected Climbs of North Carolina, suggests that the climb requires extensive use of thin stoppers. In reality, Ice Cream Direct has mostly larger gear in pods and horizontals with two stretches in which one places an RP or two. You wouldn't want to skip the RPs though.

Note: The hangers on the second and third bolts need tightening. 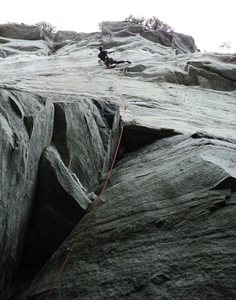