NOTE: I believe I have the FA all jacked.

Pretty sure it was Steve and Fig. I'll dig up Steiger's guide and correct this.

Various pitches were climbed in '77 by John Steiger, Ray Ringle and Don Gallagher

This is the Girdle traverse of Chimney Rock.  At least I got this right.

It's much too complex to layout here and I don't even remember how many pitches Steve and I did when we repeated it but I do recall it's a stellar route. Best at Chimney.

The thing about a girdle (the climbing kind anyway) is that you're pretty much on the hook for every pitch. Not a lot of difference as a second or lead. In fact, it's really better to be on the lead end since you can set your own pro.

Of the three girdles in the state that I've done, Overlook, Granite Mountain and Chimney, this is probably the shortest, but it isn't short and like the others, it's action packed the whole way.

Chimney Rock Girdle traverse.
Start on the left (west) end at George's Buttress and work over past Crow's Nest. It starts up high and continues across at roughly 2/3 height.

Here is Steiger's description:
"For those into girdle traverses, this is a true prize. The route takes in the cruxes of several routes plus a few of its own.

1) Start up George's Buttress. After traversing right under the roof, work right to a belay at the small pillar shown on Topo A, just below the crux of Stoner's Boner.

2) Climb up under the bulge on Centerpiece then move down and right to the break in the SLR dihedral. Continue up until possible to diagonal down and right (5.9) to the apex formed by the dihedrals on Copperhead #5 (sb.)

3) Turn the bulge formed by the apex and traverse right 25 feet (5.9) to the bolt shown on Topo B, just left of Jungle Gym. Mantle down and climb the Standard Route chimney to a belay just right of a pinnacle-like ledge.

4) Cruise up to the roof band creating the crux of the 2nd pitch of Unstrung Harp and traverse right to the Trickie Dickie crux. Reverse the crux and belay on top of the pillar on the Stripper belay.

5) Work over past the Thenedge belay to the Veranda roofs, and turn the right side.

6) From the three bolt hanging stance, traverse right and down to another Roadside Attraction, then up and right to a large belay ledge left of the 8th and Main dihedral.

7 & 8) Finish up the last one and a half pitches of Stonedmasters.

Not sure all the named routes are in the Squeezing guide but if you make it that far, you'll figure out the route. 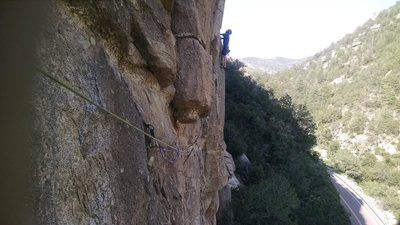 David on his way over to SLR. We are a little h…