This is the leftmost bolted line on the north face of Dinosaur Rock, up pretty, grey-green fluted rock ending at the "pinnacle" of a little spire/ledge on the wall's left side. The climbing is crimpy but positive.

This is on the far left side of the north face of Dinosaur Rock.

Please access this climb and Pretty in Pinkler only from the switchback along the Mallory Cave Trail. That is, don't approach up from the toe of Dinosaur Rock or walk down that way when done climbing. It's very steep there and will only contribute to erosion.

1. Ascend the west face of Dinosaur Rock (4th class/5.0). Drop over the summit to a small ledge on the east face, eight feet down.

2. On this ledge, tie a rigging rope (static line) through a hole/thread in a big flake. You could back this up with cams or other flakes/horns there. Rap down this 120 feet along the east, slabby face, looking for the ledge where this climb ends. (I got over here by traversing while belayed by a toprope on The Shaft, but you might be better off coming straight to it; the intrepid/sketchy could solo up the east slabs from the ground.)

3. Build an anchor by slinging the top of the pinnacle with a cordelette and backing it up with a #2 Camalot, a green C3, and a Metolius 4 or 5.

4. You shouldn't need any directionals on the way down.

This is now an eight-bolt lead climb to double-bolt anchors at the top face of the little spire. 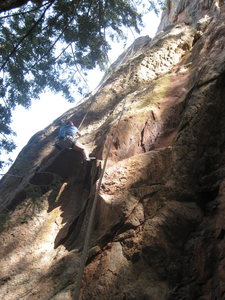 The rock on this climb is just so Pretty...in P…

More About Pretty in Pinkler