Access to the north face crosses private property which can be avoided via some serious bush whacking.

Due to the construction of a new home and a huge gate (monitored by a surveillance camera), its no longer possible to access the traditional trailhead and gain the obvious ridgeline leading to Apollo Chute. The new home sits right next to the water tanks that used to act as the landmark for the approach. Following the couloir drainage is unsafe due to loose rock (and rattlesnakes) and bushwhacking from the drainage to the ridgeline is a royal pain.

This is the prominent snow couloir in the middle of the north face of Mt Olympus. Though it appears to only go part way up the face the second half of the couloir is hidden and goes to the summit ridge traversing from left to right. The couloir is at best 45 degrees and is around 1500 feet of gain. From the summit ridge, traverse (easy 2nd class) to the north summit (spot of 4th gaining the summit).

If the upper hidden section of the couloir has melted out one can climb directly up the face following a series of easy 5th class ledges and cracks, pick the path of least resistance. There is one crux with a 5.7-5.8 move on it. (FKA Ted Wilson).

From the North summit one can retrace their steps and descend the couloir or descend down the Memorial Couloir (aka Blades Couloir cause there are rocks that stick up under the snow like blades that can rip a new asshole).

Though many folks ski Blades, bum sliding it is a lot of fun. If you catch it in the right condition it is possible to slide from the notch down to the waterfall in one go. By pass the water fall on east side (skier's right) and continue for a bit more before walking out to Neff's Canyon.

NOTE: If bum sliding down either couloir, each have a double fall line to them that pushes you into the west side of the couloir. This also happens to the side that catches sun. As such, a moat will form that can be extremely dangerous if you go into it. It has caught more than one experienced bum slider.

Park at the end of Gilead Way. It used to be that there was a trail near the water tower but now that a home has built one can not easily get to it without trespassing. This trail followed above and on the east side of the small creek that comes down from the flanks of Mt. Olympus. With the building of the private residence it is now necessary to bush whack your way around until one can cross the creek and find the trail. Follow the trail as it becomes more of a game trail. After the trails takes a steep and typically wet step up look for an unobvious fork that crosses the creek to the right. Take this fork to the right, it leads to a steep, often muddy slope that can be two steps up one back. Near the top bushwacking techniques are useful for surmounting the rim. From here follow a game trail trough the Gambling Oak. Eventually the trail will lead up to a small outcropping of rock. From here pick the path of least resistance through the oak and drop down west into the mighty couloir.

Ice axe and for some crampons. A rope is typically not needed except for beginners who can not self arrest. For practice one could bring pickets. 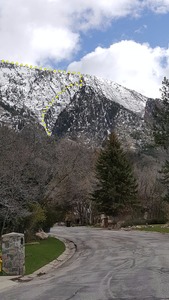 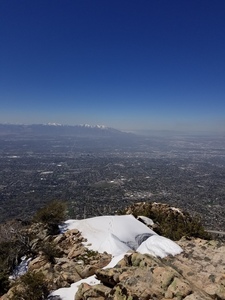 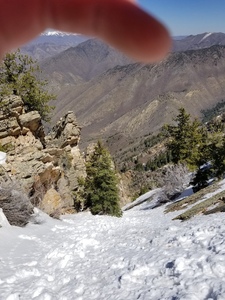 Crux thin snow section was before this pine tre… 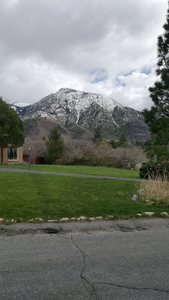 Reese couloir in the middle of the north face.