Climb through the crux of Scene of the Crime (5.10a) till you get to the roof where that route breaks right. clip a long draw on the fourth bolt and break through the roof on small holds and sinking your fingers in to an unlikely slot in the face (this is where you want to protect). get your feet up on to the face and make one or two delicate moves on tiny holds to latch the top. Mantel and clip.

It's a nice top rope variation and an engaging lead if that's how you want to play it.

Historical Note: As I was lowering off of Scene of the Crime (5.10a) Back in the mid/late 2000's I noticed a direct line straight out the roof and up to the chains that I hadn't noticed before. I took note that a red or orange TCU would protect the upper crux section. I had no idea if it had been done before but I thought I'd give it a go. Today I climbed the variation and it was super cool with a few fun moves that keep you on your toes. I asked a guy at the crag that seemed like he had been around a while if the line had been done before and he informed me that he did the first ascent of it in the 80's. How weird is that he just happened to be there. Anyway he gave me the name of the route and said that it had been in the first Rumney guide book (which he had written) as 5.11a, I told him that I agreed with the grade and that was that.

Update: I have now known Den for over a decade (it's 2021 as I write this) and find him to be a delightful crag neighbor when I run into him. Every time we see each other we have the same conversation.

Den- "Lee, you are the rightful first ascensionist of Maria's Variation. You should change it on mountain project."

Lee-"Naw man, you spotted the line and climbed it before I ever even tied into my first rope."

Den- "But that doesn't count. The Lead is what counts. You should change it."

Lee- "But I respect the history and the vision...."

...And on and on it goes. Well today, I ran into Den at a small crag in southern NH and he finally won. Out of respect for his wishes I have listed myself as the FA. But I am keeping his name right next to mine because Den was The Man back when I was just a small boy. Thank you Den for the constant good vibes at the cliffs. Think about it guys, he's been climbing at Rumney longer than most Rumney climbers have been alive and he's not complaining about crowds. He's too busy encouraging the next generation... and the next... and the next.

This is a direct finish to Scene of the Crime 5.10a. climb that route to the roof and continue out the roof to the top.

4 bolts and one piece in a slot on the above the roof. i was able to put in an orange and a red TCU in the same spot but one or the other would do fine. 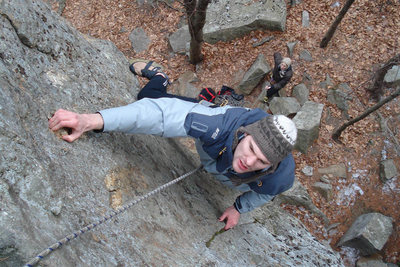 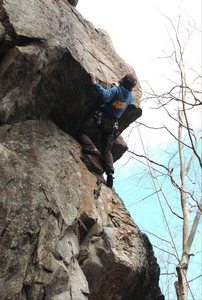 me climbing Maria's... photo by nicole.