Start up by stemming between the wall and the boulder pile, or by climbing the loose-ish flakes on the face, clipping a bolt along the way. Or just scramble up the boulder pile (you might miss the first bolt if you do that, though). Clip the second bolt and stretch for a bomber jug. Pull through to a solid stance to place some hand-sized pro, then angle up to the right, liebacking and protecting the semi-detached flake. Find the third bolt in the face to the left, and step left across the face to another semi-detached flake. Top out by following this, or apparently one can continue straight up through scoops (a little run-out, maybe safer to try that on toprope). Both options reach a big ledge with a bolted anchor at eye level on the face behind (allowing for a decent toprope setup).
Previously described by Jett and Samet (1991:84), Beverly (2006:58), and Jackson (2006:211). Jett and Samet gave this route an "R-" annotation, and the other two guides call it "R", although I'm not sure why; maybe if you choose the right finish through the scoops?

Begin in a little alley just left of the boulder pile, just to the right of a black streak on the wall.

Three bolts (two fairly low on the route). Trad rack with mostly larger gear (save #3 and #4 Camalots for the upper left exit crack). (although I have heard of someone leading this on only the bolts!! scary-bold, or foolish?)
Two-bolt anchor at the top (actually one closed cold shut and a bolt with a chain). Either rappel or walk off (actually a class 3 scramble-off). Once you know where the anchors are you could set this as a toprope if you walk up the backside. 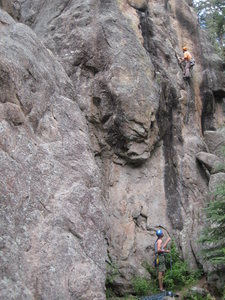 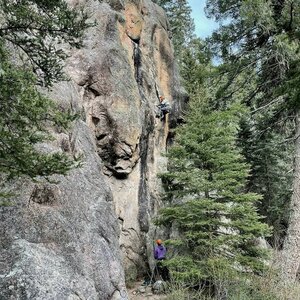 Making moves through the big flake on *Tasty Fr… 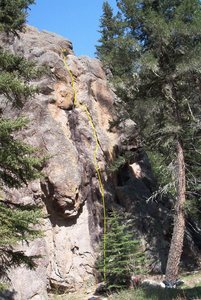