Described in Jackson's guide book as "seldom climbed", and there's probably a good reason for that. From the top of the boulder pile, delicately climb the face and/or arete to the roof. A fist- to arm-bar sized crack leads around the right side of the roof. Follow more secure, lower-angled fist and hand cracks to the top anchors, just past an easy bulge.
Previously described by Jett and Samet (1991:84 -- they call it 5.8), Beverly (2006:58 -- called it 5.8-), and Jackson (2006:211 -- called it 5.8). None of these guides had previously presented a route topo, though.

This starts on the right side of the boulder pile, about 30 feet right of the Tasty Freeze bolts and about 30 feet left of the bolted Candy Corn route.

Trad rack to #4 Camalot (#4 is pretty essential), also including a thin-finger sized cam.
Two-bolt anchor at the top (actually one closed cold shut and one bolt with a chain). One can either rappel or walk off (a class 3 scramble-off, actually). Once you know the anchor, this can be set as a top rope by walking up the backside.
Although it's not indicated as such in any of the books, I added an R rating, due to what I felt was the sketchy-ness of the face just off the top of the boulder pile. One has to make a pretty unprotected move to gain a stance on the face where you can reach a thin-finger cam placement in a pod under a semi-detached flake, which appears pretty solid (but I swear, the flake made a creaking noise as I climbed past the cam!). That's basically all the meaningful pro you get until you reach the roof crack, so there's a possibility of landing on the boulder pile, or the ground below, if you peel off the face (so maybe even ~X rated?). 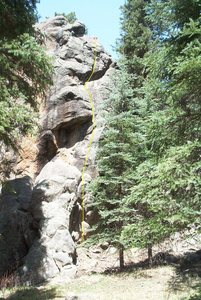