Traffic from drug smuggling and illegal immigration is high in this area. Exercise caution. US Border Patrol recommends avoiding this area completely after dark.

A long, fun backcountry climb that has fantastic views and exposure! The Bob Kerry guide gives it three stars.

Note that there is a tradition of taking I'itoi a gift at the summit. If you are planning to take a gift for I'itoi, you might choose a gift that I'itoi can hand back out to stranded climbers. This might include lighters, waterproof matches, rain panchos, space blankets, flashlights, etc.

Pitch 1
Climb straight up. The first 30 or 40 feet are 5.easy to a 5.4 bulge. Pull the bulge and continue up the easy face. There is a tree to the left that can be used as a belay/rap station, or continue straight upward to a large ledge and an easy 4th class scramble up another 30 feet in a chimney to a notch with a vertical wall section on the right and lots of exposure to the left. There is a solid dead tree trunk here that can be used as a belay anchor.

Pitch 2
Climb the verical wall (5.6) via stemming or using good foot and hand holds. The few moves here may seem a bit tougher than 5.6. The massive exposure to the left of the route also adds to the experience. 30 feet of climbing gets you over the vertical section and back onto easy scrambling to a huge ledge for belaying.

Pitch 3
Scramble up the 4th class chimney past a shady tree to a belay ledge with blocky rocks.

Pitch 4
A couple of 5.6 lieback moves early in the pitch yield to lots of scrambling for 120 feet to what Bob Kerry describes as a 'spacious' vegetated ledge. Compared to previous ledges in the climb, this ledge is small, but roomy enough for 2-3 people. This ledge can be used for a belay; however, continuing another short 25 feet left via a traverse brings you to two anchor bolts and skips the short 25 foot traverse pitch in the Kerry guide. These bolts are a bit manky but there is good opportunity for placing pro and establishing a solid anchor here. Belaying here also helps with rope drag on the next fun pitch.

Pitch 5
A fun 5.easy lieback pitch climbs up for about 80 feet at which point you move right and start 3rd class scrambling. At that point, find any comfortable place to belay once you get to the easy stuff. From here, continue 3rd class scrambling and bushwacking until you reach a notch or gap. Move left along the notch and scramble down. There is more awesome exposure here to the left and some may choose to be belayed down from the point to the notch.

Pitch 6
Easy face climbing from the left part of the notch for about 20 feet quickly yields to a scramble all the way to the summit.

In general on this climb, follow the path of least resistance and you won't go wrong.

At the top of the notch is the dead tree with rap slings described in Bob Kerry's guide. From this point, scramble up and left (south) another 20 feet or so through some brush to a belay ledge. The first pitch starts here - not from the notch but from above it.

A light rack consisting of some small & medium cams, standard stoppers and some small to medium tricams.

There are a couple of options for descending - either down the Forbes/Montoya Route or back down the Southeast Arete. The advantage of descending the Forbes route is that it puts you closest to your final car destination without having to backtrack/bushwhack back down the Lion's Ledge.

If descending the single-rope Forbes/Montoya route, you can descend either back to the east saddle at the head of Thomas Canyon or to the west and The Great Ramp. You will need to decide which direction you are going at the bottom of the Forbes route Ladder Pitch. No matter what direction you go on Forbes, there are numerous opportunities to take the wrong direction on what are well-used trails during the descent, with the result of ending up in a location far away from where you wanted to go. Be sure to allow for enough time and daylight to possibly have to backtrack during the descent if you are not familiar with the route.

You can also descend back down the Southeast Arete Route. Kerry's guide describes this as a two rope descent, but while climbing the route, it looked like there were possibly ample opportunities to use trees or boulders for a single 60m rope rappel (?).

Forbes/Montoya Route Descent
From the summit, look north to the Kitt Peak observatory. The trail for Forbes route starts slightly to the right of the direction toward Kitt Peak on the opposite side of the summit from where you top out on the Southest Arete climb. It is a trail that winds through bushes and then starts skirting the base of a wall to the left. Follow along this wall for a few hundred yards ignoring any temptation to go toward ravines or trails to the right.

After skirting the wall on the left for a few hundred yards, the trail will turn right and drop down a large steep gulley filled with loose rubble. Follow the gulley down and stay to the right when you get to a large rock formation (kind of like a waterfall). You will have to downclimb about 15 feet on the right to get to the bottom of the rock. It can look a bit tricky but there are good foot and hand holds.

Immediately after the downclimb, continue following the trail descending to the right. Scramble and downclimb the ravine for about 100 yards and you will reach the top of the Ladder Pitch of the Forbes/Montoya route. There are old pieces of metal still stuck in the rock from when the CCC installed the hardware during the 1930's. There are two new, solid rap anchors with chains here to the right behind an overhanging tree. Rappel all the way to the base of this section.

If you are going to the east (to the saddle at the head of Thomas Canyon), stay right along the base of the wall through brush and trees and follow the trail north onto the visible slabs ahead. Walk along the slabs moving slightly downward and you will see two anchor bolts (with slings) on the slabs. Rappel down from here.


Continue descending right (north) skirting the rock wall on the right to a notch. There are two anchor bolts at the notch on the left. Rappel or downclimb the short chimney with a large chockstone to solid ground and follow the gulley down to the trail leading to the east saddle at the head of Thomas Canyon. For me, the Forbes-east descent took about 2 hours to get from the summit back to the east saddle.

More information on the descent via Forbes route to the west and the Great Ramp (along with more Southeast Arete beta) can be found here:
climbaz.com/climbs/SEArete/… 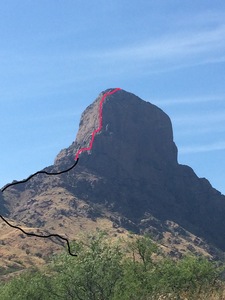 Taken from the east approach. 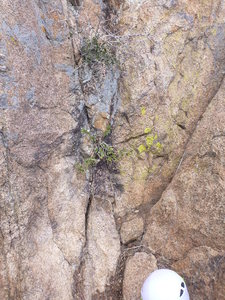 The start of the route. X marks the spot 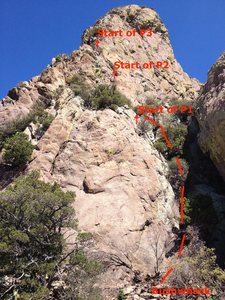 View of the Base of the Climb. Bushwhack up th… 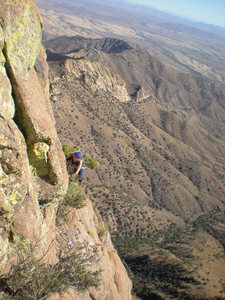 Cindy coming across the 25 foot traverse along… 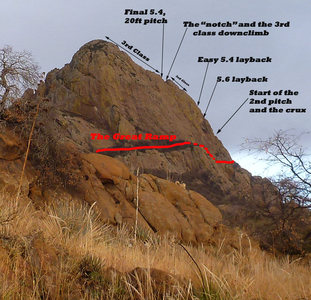 Here is a little overview of what you see of Ba… 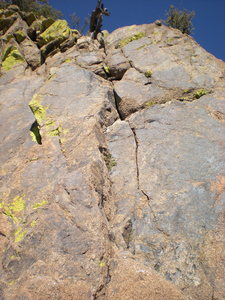 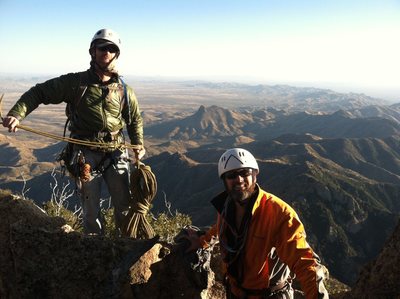 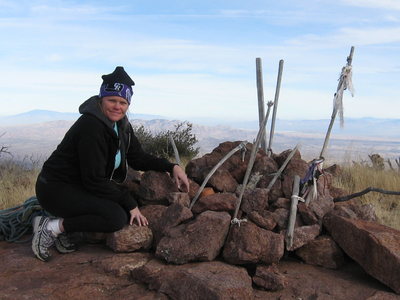 Kimberly at the summit 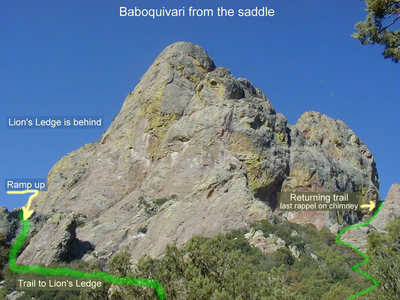 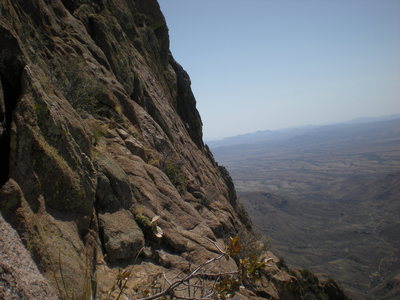 The route as viewed from the SW Face. There is… 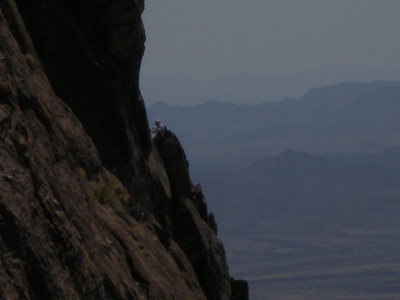 A climber at the base of P2's "thirty foot vert… 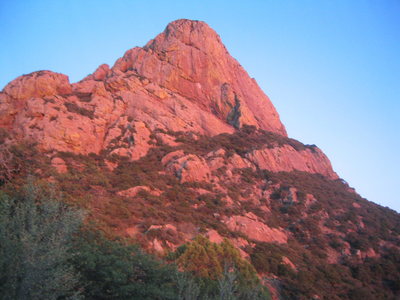 Profile of south face, with the Southeast Arete…