From the refugio, head to the saddle between the two peaks. From here you can see the trail through the scree to the left of the ridge. As you get closer to where the ridge meets the saddle below and right of the summit spires, the trail becomes discontinuous and you can take several different ways, all requiring short sections of scrambling over often loose volcanic rock before you reach a small level area, with a steep downhill gully on the right and the short steep face on the left. From here, head up between the large rock outcrop (left) and top of the gully (right), making your way to a small but steep talus slope above a short cliff at the top of the gully.

[It was just below this feature that we were turned around by large chunks of rime ice loosely pasted to the rock, which were being warmed quickly by the sun and crashing down around us. Most pieces were fairly small, but many were big enough to knock you off your feet on the snow-covered talus slope above the cliff that sits above the gully. I would've gone for it if we had had ice axes and helmets, but since it was our honeymoon climb, it seemed like a good idea to turn around. We headed back to the refugio where we spent the night and got up early the next morning to try to reach the same spot before the sun hit it, but we were about an hour too late. In that short period of time the ice got warm enough to where it was breaking off just as badly as it did around 1:00 in the afternoon the day before. Disappointed that we probably wouldn't summit, we headed back toward the refugio and on the way decided when we got back to the saddle, we'd traverse around the right side of mountain and go up the descent route, which we did and ended up summiting after all. Anyway, because of this I haven't personally been on the ridge as it joins the last steep rocky bit shared with the descent route. Because of this I'm describing that part below based on what I saw during the climb and from studying photos that I took of the mountain. If I've gotten it wrong, feel free to tell me in the comment section and I can update it.]

Angle up and right across this slope to the ridge crest (snow-covered when I was there). Round the corner to the other side of the ridge heading toward the large tooth-like spire which you skirt on the right until you come to a cliff band where you have to scramble carefully across loose gravely slopes above cliffs. From here you can see the next ridge over, just below the summit. Look for the line of least resistence and head up steep rocky terrain until just below the summit where you can once again look across and see Illiniza Sur to the south. Scramble a little higher to a point at which you turn back left across the summit ridge and head up the last 30 feet or so (also covered with snow when we were there) on the south face to the summit marked by a small metal cross.

Normally, this route is rated 3rd class, but I've added "easy snow" to the rating since you can and should expect snow and/or rime ice (caused by the summit spending time in clouds during freezing conditions) at any time of the year. Because of this, it's advisable to bring at least an ice axe to the hut from which you'll be able to look up and decide whether or not you'll need to use it. The first short snowfield (above the cliff at the top of the gully, where we turned back) was borderline unsafe without an ice axe as was the last short summit snowfield, which we had to ascend with extreme caution due to the fact that a slip would send you all the way down the steep south face (see the photo above). Also, I listed route length at 1,600 feet which I read somewhere was the distance from the refugio to the summit. Obviously from the trailhead it's a lot further.

In dry conditions you wouldn't need any unless you have some people in your party who feel a little unsteady on steep scrambles, in which case you might bring a rope. It's a good idea to bring an ice axe up to the refugio in case there might be snow on the peak, and you can leave it there if there isn't. If you know for sure there's going to be snow, you might bring crampons and even a rope depending on how much is there and if anyone's been there yet to kick steps. 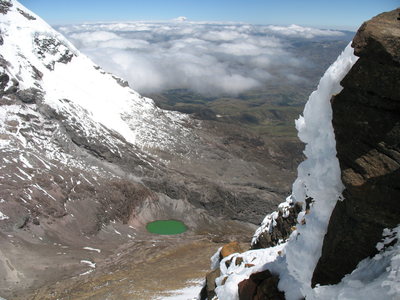 Looking down at the jade green crater lake betw… 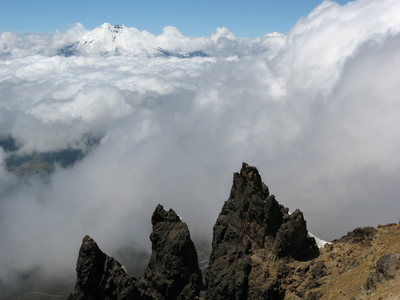 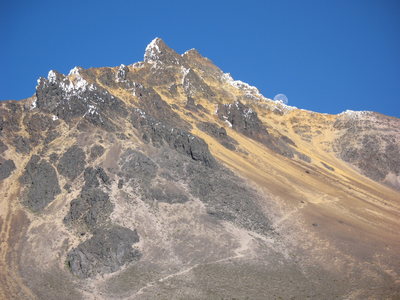 The descent route on Illiniza Norte. 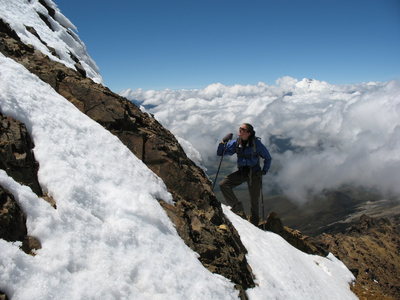 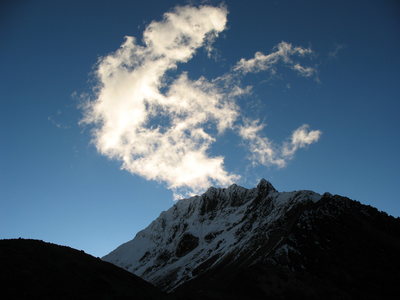 A wild windblown cloud rises above Illiniza Nor… 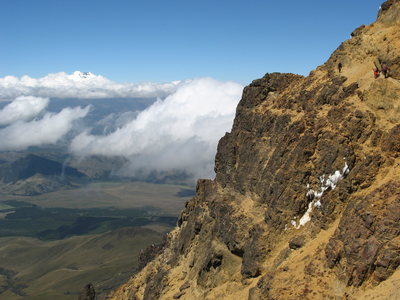 A larger view of the traverse showing Cotopaxi… 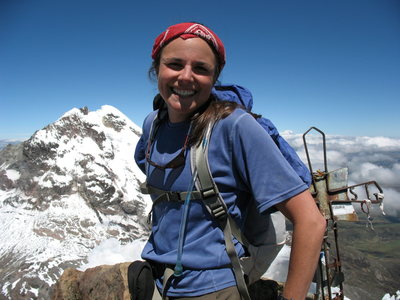 Nancy Bell on the summit of Illiniza Norte with… 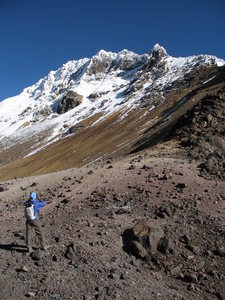 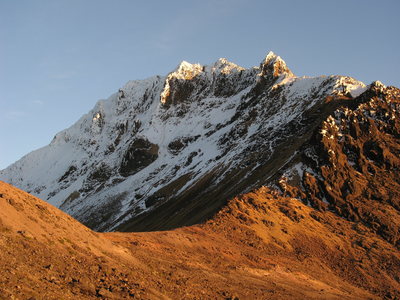 Illiniza Norte from the refugio just after sunr… 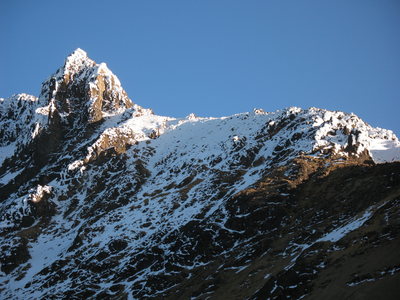 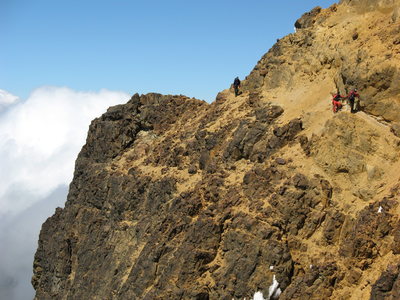 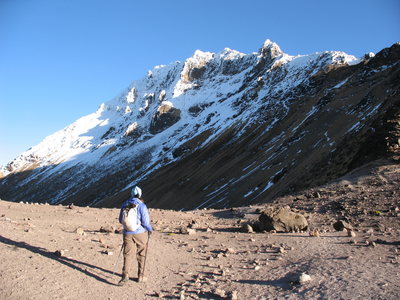 Nancy Bell heads up the start of the Normal Rou…