Revenge of the Elderly

This is a longer, somewhat wandering, route on the Gemstone East crag. It generally has a northern aspect, but it does get sunlight; it could be icy in the deep east-facing features if one were to try a winter ascent.

This route is described and pictured in Jackson's (2006) New Mexico guide as well as in Schein's (2003) Sandia guide book; it is also described and illustrated in the 3rd edition of Hill's "Hikers and Climbers Guide," although it is not in the 2nd edition (don't know about the 1st ed.). The route appears to have recently been 'pruned' with a garden trimmer.

Pitch 1. Friction up the slab past three bolts, with delicate moves past the top bolt to a ledge with a tree at the far left end. Probably good to set a piece above the bolt line before you traverse to the tree, to protect the second. Belay at the tree, which sports two sections of rope fed through tubular webbing (as of September 2019); a crack in the slab next to the tree can serve for an anchor backup.

Pitch 2. A short pitch up and right over easier, blocky ground toward the massive left-facing dihedral. Follow the left-leaning dihedral up a short distance to a 'cave' in the wall of the dihedral. Hint: I hit the dihedral too high, and missed the cave at first because I wasn't looking down to the right. Crawl through the short tunnel at the back of the 'cave' to a solid belay stance where you can stand up, emerging from the rock like a prairie dog. Belay either from a gear anchor at the entrance to the cave, or leave a directional piece at the entrance and belay from the rap anchor (two sections of rope fed through tubular webbing) at the back of the tunnel. This is the established second rap point for this route's descent.

Pitch 3. Out of the crawl-through, and then slightly right up a broken lower-angle face to a ledge at the base of a black stained crux chimney that narrows at the top. Interesting stemming to the top of the chimney leads to another short face that culminates in a prominent arched roof with a clean arc-shaped crack marking its base. To belay, I built a gear anchor in this crack at the left side of the alcove. As of September 2019, there is also a slung horn in a little recess about 15 feet down and to the left, suggesting a possible rap anchor.

Pitch 4. Exit from around the left side of the alcove, climbing for a short distance to the left, then reach a broken slab that heads up to the right. A left-leaning shallow, broad chimney with twin cracks then leads to the final friction face. Traverse this slightly runout, delicate slab, up and then right, ending at the three-bolt, two-chain anchor (the third bolt at this station is just a spinner buttonhead).

Start at the toe of a broad slab, about 50 feet below and climber's left of Opal and Emerald City (easily accessed by downclimbing a class 2-ish gulley below Surf Naked, or by a climbers' trail that contours in from the base of the Gemstone West crag).

Descent: Several options are available, depending on which guide book you consult, but all involve rappelling. For many of the Gemstone East routes that are listed on mountainproject.com, rapping RotE is presented as the preferred option. Conversely, Schein (2003) recommends rappelling Emerald City. We rapped RotE, so I cannot comment on the Emerald City option.

TWO RAPPELS (requires two 60m ropes)
The top rap anchor features two bolts with chains. Using two 60m ropes, a ~150 foot rap takes you to the slung block at the cave/tunnel at the top of the climb's second pitch which is visible. This second rap anchor features 2 tied lengths of static rope inserted/covered by tubular webbing and two aluminum rings as of September 2019; it looked ok but may need updating, so plan accordingly. From the cave/tunnel anchor, a ~105 foot drop will apparently set you down at the base of Surf Naked, but to get to the base of RotE, where your packs are presumably cached, it'll probably be more like a 135 foot rappel. HINT: The orientation of the rap rings must be to climber's right (west, towards the steeper face) at the cave/tunnel anchor. Do not orient the rope to the climber's left (east) into the notch or your rope will get stuck when you pull it.

Notes: The sling that used to be over the horn left of the third anchor may indicate an available rap station, in a pinch. That, in conjunction with the slings on the tree at the first belay station, suggests that rapping the entire route in four drops with a single rope may also be possible.

Standard rack of singles in cams and nuts. I used a #4 camalot, but that is not essential; smaller cams are more useful (e.g., Metolius #1-3 sized). Three bolts are featured on the first pitch. 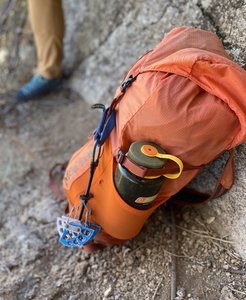 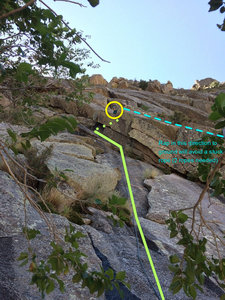 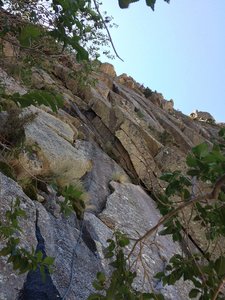 Looking up from the top of pitch 1 to pitch 2 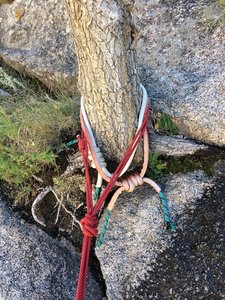 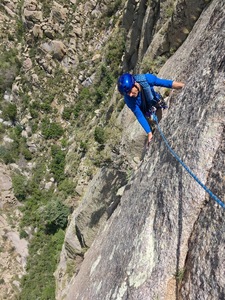 Jason approaching the chain anchor on the final… 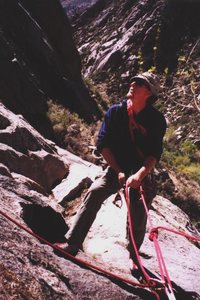 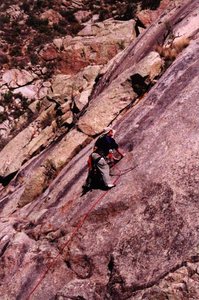 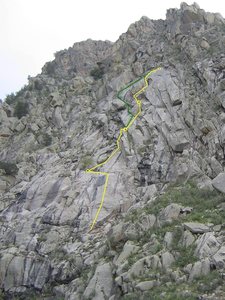 Approximately in green, a variation to the uppe… 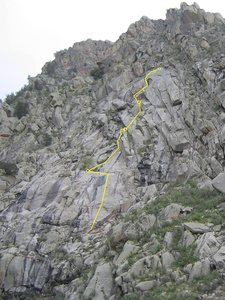 More About Revenge of the Elderly